by Sri Sri Ravishankar: Terrorists are cowards. Whenever terror has struck in any part of the world, we have heard people say it is an act of cowardice. 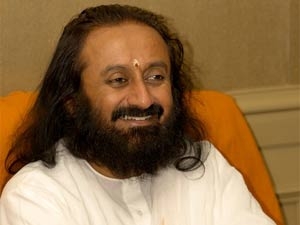 A coward runs away from action but harbours all negative feelings and does it surreptitiously.

This is exactly what happened to Arjuna. Arjuna was angry, upset, sad and wanted to run away. In the Bhagawad Gita, Lord Krishna said not to be a coward. So, it is an antidote to terrorism. Shri Krishna said bravery is the way – face the war when it is inevitable and do your duty.

A terrorist is stuck in his identity – he hides it, has no rationale and inflicts pain. Whereas Bhagawad Gita helps one to transcend one’s identity, encourages reason and infuses wisdom. In this sense, it could be called the antidote to terrorism.

The duty of a policeman, a soldier or a king is to be impartial for the sake of the nation, whether it is their mentors or relatives. Terrorists are never impartial. A soldier is brave and a terrorist is a coward. A soldier is protecting and preventing violence and a terrorist is inflicting pain and suffering. The Bhagawad Gita is the scripture of bravery in both realms of physical and metaphysical.

Terrorism is deeply steeped in hatred. An act without hatred is what Gita propounds. The Gita epitomizes the correct action – of righteousness, of upliftment of spirit and an action or duty that ought to be performed even in the most compelling situation.

In the last 5149 years of the existence of the Gita, there is no evidence of someone becoming a terrorist after reading it. In fact, Mahatma Gandhi wrote commentaries on the Bhagawad Gita and it was an inspiration for his non-violent movement. The Bhagawad Gita is a unique scripture which caters to the entire range of human evolution, comprising every level of this vast existence.

Gita stands for poise and equanimity and for performing one’s designated duty. Krishna does not encourage everyone to take the weapons and fight but a soldier cannot sell bananas in the market. He has to take his weapon to bring security to his people. If Bhagawad Gita is a terrorist scripture then all military academies in the world are nothing but terrorist organizations. Doesn’t this sound strange? Would the courts ban Lenin, Marx and Mao Tso-Tung, who to stay in power inflicted terror on millions?

A terrorist or a coward hides and inflicts pain on others whereas a soldier sacrifices his own life to bring security and peace to people. They both may take the gun but their intentions are poles apart.

Interestingly, in any military training all over the world, the soldiers are asked to see the enemies as dangerous objects which need to be eliminated. The psychology behind indoctrination of such an idea is that when they think the enemy is a human being the soldiers are unable to raise their arms. There are many such survival tactics where the army men are desensitized.

A similar situation happened to Arjuna. Lord Krishna went step by step to deal with Arjuna’s emotions, ego, mindsets and concepts. He finally touched on the nature of his spiritual being; revealing him the highest knowledge and making him realize his eternal nature. This brought him enormous strength and then propelled him to perform his worldly duties. A doctor cannot be taken as a dacoit just because he opens up the stomach of the patient.

Krishna says, no sin begets him whose intellect is unattached and free from cravings and aversions, even if he kills the whole world. Now, the condition of an intellect free from cravings and aversions itself counters terrorism. Terrorism is done when the intellect is deeply attached and is hateful. The metaphors and the high standards of humanism exhibited in the Gita are unparalleled.

Jesus had said, “I did not come to bring peace, but a sword. For I came to set a man against his father, and a daughter against her mother, and a daughter-in-law against her mother-in-law; and a man’s enemies will be the members of his household.” In the Quran, there are many verses which talk about striking terror in the hearts of the infidels and cutting off their fingers. By these standards if you still call Gita a terrorist scripture then you have to precede such statements by Bible and Quran.

The fact is that it is not the scriptures that inflict terrorism; it is the mis-interpretation of an ignorant and stressed mind which justifies their actions quoting scriptures.