WOMAN’S EAR REGROWN IN HER FOREARM

by: Peter Murray:  In one of the more bizarre, but nevertheless miraculous, feats of modern medicine, doctors at Johns Hopkins University were able to give a woman her ear back by first growing it beneath the skin of her forearm. 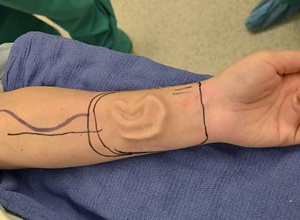 Sherrie Walter visited her dermatologist because of a pain in her left ear. It turned out that the pain was being caused by basal cell carcinoma. By October 2011 the cancer had spread to her ear canal, making the amount of tissue that needed to be removed extensive. In a 16-hour procedure, doctors removed, not just her entire ear, but neck glands, lymph node tissues, and a portion of her skull.

Dr. Patrick Byrne, associate professor in otolaryngoilogy-head and neck surgery at Hopkins, explained to Walter that prosthetic ears don’t always stay fixated to the head – that, sometimes, they fall off. And given the extent of the procedure, her situation was worse. “Sherrie’s skull bone had been removed,” he told ABC News, “so the only way of attaching a prosthetic would be through tape and glue. We both agreed that wasn’t an option.”

The second option was to reconstruct the ear. But the skin needed for reconstruction comes from the face and neck, and the initial surgery had already removed most of the skin from those areas. So Byrne suggested a procedure seemingly out of a science fiction movie. They would reconstruct an incomplete ear using the skin they had, then plant the ear beneath the skin of her forearm. There the ear could survive and be given the time to grow. Cartilage from Walter’s rib cage, and skin and arteries from other areas of her body were placed in her arm. The skin was left to grow around the tissue. After being in her arm for four months, the new ear was taken out and reattached this past March. Since the reattachment the team has been sculpting the skin and cartilage so that the shape matched the right ear. The sculpting process ended Oct. 2, the last of a series of surgeries spanning 20 months. According to the Baltimore Sun, the procedure is believed to be the most complicated ear reconstruction ever performed in North America.

The bizarre procedure had actually been conceived of a while ago. But, according to Dr. Byrne, they were waiting for the patient who was the right age, in good health and had a “good support system.” Walters turned out to be that patient.

The procedure did have its share of difficulties, however, both for the patient and for doctors. The skin over Walter’s forearm was initially too tight to implant the ear. To loosen the skin, a balloon filled with saline was placed beneath the skin to stretch it out. It was a painful process for Walter who had to wear the balloon for several weeks.

Basal cell carcinoma is the most common form of cancer in the United States. In 2006 an estimated 2,152,500 people were treated for nonmelanoma skin cancers, three-quarters of which are basal cell carcinomas. To put that in perspective, the number of cases for all other types of cancer that year was estimated at 1.4 million. Until we have a miracle patch cure, reconstructive surgery is going to continue to be extremely important for people with skin cancer. Thanks to daring physicians like Dr. Byrne, they now have one more option.