by Phillip Matthews: Marianne Williamson is an internationally acclaimed author and lecturer. She has published countless books, four of which – including the mega bestseller 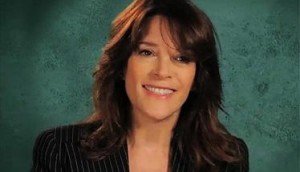 A Return to Love and the newly-released Everyday Grace – have been #1 New York Times bestsellers.  Her titles also include Illuminata, A Woman’s Worth, and Healing the Soul of America. She also edited Imagine: What American Could Be in the 21st Century, a compilation of essays by some of America’s most visionary thinkers.

Ms. Williamson has been a popular guest on numerous television programs such as Oprah, Larry King Live, Good Morning America, and Charlie Rose.

Ms. Williamson also co-founded the Global Renaissance Alliance (GRA), a worldwide network of peace activists. The mission of the GRA is to harness the power of non-violence as a social force for good.

I recently was revisiting her book, The Gift of Change: Spiritual Guidance for a Radically New Life and remembered the conversation we had about honoring the gift of change in ones life.

Below is one of my exclusive Q&A conversations with Marianne Williamson on the Gift of Change.

Philippe Matthews
How did this book, The Gift of Change come about?

Marianne Williamson
“I think when you get to meet anybody as a reader; to really reach them is if you are speaking from what is true to you. All of my books are speaking from where I was at that moment; what am I thinking about, what am I going through? This book is no different. I was really fascinated by this principle in the Course in Miracles that the moment a mistake occurs, the complete healing of the mistake, the solution to any problem is born into the mind of God the moment the mistake occurs. I was really interested in how that applied to the World Trade Center bombings being hit by those planes.

If you follow the principles in the Course In Miracles, it will tell that the moment the planes hit the World Trade Center this plan was created that would completely heal this whole problem but God can’t do for us what He can’t do through us. We say that God has a plan by definition it’s a plan that people carry out but the state of the world we are in now reflects the state of consciousness we’ve been in. so to say God has a plan for the healing of the world means also God has a plan for us becoming the people we need to be.

It seems to me that the stress, not just that the world has been in but so many individuals have been in the last year or two has been as though subconsciously we’ve been putting ourselves through changes that would come about when we face the issues we need to face in order to breakthrough and become the people we need to be.”

Philippe Matthews
In the introduction, “The Challenge to Grow”, you talk about a collective depression. Explain.

Marianne Williamson
“I do think there is a collective depression because after 9/11 and what I talk about in the book is that we don’t have a positive conversation about emotional depth, spiritual depth and intellectual depth. Case in point, there is a singer, Jessica Simpson and her husband Nick. Maybe I have heard this woman sing one song on television but I do know this, I can’t go anywhere; buy a carton of milk or pass a newsstand without being confronted by these magazines that ask the question, ‘will Jessica and Nick’s marriage make it?’ I don’t even know who these people are but I do know this.

There are people dieing in Iraq, I know that we have not handled this terrorism issue, I know that a lot of the world is angry at us and I know that there is a lot of human suffering so why are we obsessed and why is the media focusing on whether or not Jessica and Nick’s marriage makes it? This is perfect example of the neurosis of our popular culture.”

Philippe Matthews
Talk to me about this social avoidance and detachment. How dangerous is this for the collective consciousness?

Marianne Williamson
“In think that in an individual’s life, it’s really to your detriment if you don’t look at your own mistakes, you never look at your own failings and you never look at your weaknesses. If you go to therapy and you only talk about what you are doing right, you have the wrong therapist. Self awareness is the key to everything. Once you know that your life is a reflection of your consciousness then you know to look at your own self and your own failings is absolutely imperative if you want to move forward. But when it comes to our national life, which is the same dynamic because all a nation is a collection of individuals. What happens here is that in our national life if anybody says, ‘well, America needs to look at their own failings and their own weaknesses.

The people of the United States really need to take a look at what their foreign policy has been over the last two decades; how it has affected the world; what people attitudes are to us… which by the way, people were eager to have an investigation right after 9/11. the average American was asking, ‘why do they hate us?’ but then we went into this mode of war where all you are suppose to do is be a cheerleader for revenge and if you questioned this at all whether or not America needs to look at its own failings, you were unpatriotic.

They would say that you are blaming America which of course you are not. So that’s where we are. We can have meaningful conversations as individuals but our worst problems are not as individuals. Many of our worst problems are collective. They are problems that you and I are having together, so deepening the popular dialogue, deepening the collective conversations I believe is the real imperative of this moment.”

Philippe Matthews
How do we begin deepening the collective dialogue?

Marianne Williamson
“Well, you are doing it. Media sources, usually alternative media sources because the mainstream media is very much a hand maiden of the status quo, very much locked into ‘let’s keep it light.’ But people like yourself Philippe and there are people like yourself all over this country who represent an alternative media that present a different gestalt a different conversation and it think if you put it all together, there is a lot of it out there.”

Philippe Matthews
Have we come far from 911 or are we back in the same collective consciousness that got us there?

Marianne Williamson
“Yes that what our leadership told us to do. Bush’s line was basically we hadn’t done anything wrong and that we are so good and so free that people are jealous of us and all we have to do is keep shopping and we’ll take care of it. That’s basically been the party line. While there is some truth in that, I do think there are people who are jealous of us because we are good and free but I don’t that is the whole story and that’s the importance of leadership and that is the line that emanated from the White House and a line that a lot of people followed.”

Philippe Matthews
On page 7 in your introduction, you say “Most of us live with a deep, subconscious longing for another kind of world.” What did you mean by that?

Marianne Williamson
“Obviously we all feel in our hearts that some magic is missing. Why do you think books like Harry Potter are so phenomenally popular? Its not just children its adults as well who wish for something beyond the veil. That’s why we read fiction, that’s why we go to the movies, that’s why we listen to music, read poetry and strive in all kinds of ways. There’s a magic we get; we get it when a baby is born, when we fall in love and even in an ironic way when someone dies. The mystery hits that pierces the veil of illusion and we are reminded of something bigger than this and I think it’s the longing of our souls.”

Philippe Matthews
How do we stop avoiding the truth of what is happening to us?

Marianne Williamson
“I think we need to understand that the popular culture in America today is toxic and we have to make a conscious decision to detach from it more. That doesn’t mean pieces of it aren’t fun and escape and entertainment every once and a while is not a good thing. I’m not prudish or over serious, I’m just saying there is a general tenor of dialogue that is very, very shallow. We are in a time in our history when we cannot afford to be shallow, we cannot afford to turn away from the deeper conversation that begs to be had.

You are looking at infinite possibilities and claiming them for yourself or you are thinking along the lines of ‘oh I can’t and it won’t happen for me.’ In the course in miracles there is a line that says, ‘We achieve so little because our minds are undisciplined.’ We have flabby minds with fear-based thoughts or limited thoughts or scarcity based thoughts and we can change that.”