4/24/12 by Dr. Andrew Weil: Until I was 40 years old, I was a botanical field researcher and constantly on the move, so much so that I seldom bothered to have an actual residence. 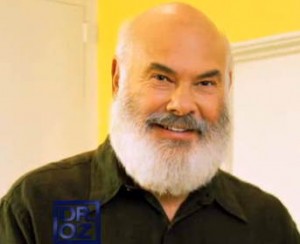 I was also an only child and did not marry until I was 49 — a fiercely-independent streak is a fundamental part of my makeup. Where would a dog fit into this picture?

Yet something in this untethered lifestyle never really worked for me. I was depressed for much of my early adulthood — not clinically so, as I could still function, but I was miserable more days than not, often for weeks at a time.

In 1982, a longtime friend — one of those rare, priceless people who can see gaps in your emotional life that are invisible to you — gave me a Rhodesian Ridgeback puppy as a birthday present. I told her, gently, that it was utterly inappropriate; my life was far too unsettled. She thrust the puppy in my arms, looked me in the eye, and said, “This will help to settle you.”

“In order to really enjoy a dog, one doesn’t merely try to train him to be semihuman. The point of it is to open oneself to the possibility of becoming partly a dog.”

Dogs have been my constant companions ever since — for 30 years now. My current pair — Asha, the female, is 2.5 years old, and Ajax, the male, is 3.5 — are my third generation of ridgebacks. I raised all of them from puppies. All have stuck by me through my worst moods and often lifted me out of them.

They also care for me. Once, I was very sick with the flu, essentially immobilized in bed with a very high fever, muscle aches, and overall weakness. The male I had at the time, Jambo, lay next to me the entire time and absolutely would not move except to eat, drink and relieve himself, all of which he did as quickly as he possibly could so he could return to my side. It was healing medicine in the most real and profound sense, and I am absolutely sure it speeded my recovery.

The ways that my dogs can make me — and my visitors — happy constantly amazes me. Now, Ajax has started actually giving hugs. A person sits, Ajax walks up, puts his front paws on the person’s shoulders, and rests his head on a shoulder. If that doesn’t get to you, you are made of much sterner stuff than I am.

“No matter how little money and how few possessions, you own, having a dog makes you rich.” — Louis Sabin

One of the most obvious ways dogs can improve our physical and mental health is via daily walks. In researching, Spontaneous Happiness, my book on emotional wellness, I received many stories from people who said their dogs’ need for exercise and fresh air was precisely the push that got them away from immobile isolation in front of glowing screens and out into the sunshine.

But the benefits can go far beyond this. A great deal of research confirms that living with companion animals — not just dogs, but also cats, birds, even reptiles and fish — offers a wealth of physical and emotional rewards, especially for those in difficult circumstances. Lynette A. Hart, Ph.D., a professor of veterinary medicine at the University of California, wrote, “The comfort and contentment offered by animals is documented in a large number of studies with vulnerable people, including children, the elderly, and people with disability, disease and loneliness.”

I explore some of the more unexpected benefits of pets in this article: “The Health Benefits of Companion Animals.”

Andrew Weil, M.D., is the founder and director of the Arizona Center for Integrative Medicine and the editorial director of www.DrWeil.com.