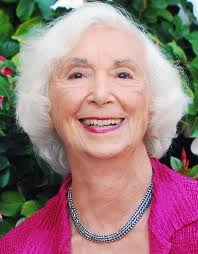 Example of Teaching
“In human history there has been a continuous and growing impulse toward the regeneration and transformation of humanity.”

Birth 2012 and Beyond: Humanity's Great Shift to the Age of Conscious Evolution

Emergence: The Shift from Ego to Essence

Barbara Marx Hubbard has been called “the voice for conscious evolution of our time” by Deepak Chopra and is the subject of Neale Donald Walsch’s new book “The Mother of Invention.” A prolific author, visionary, social innovator, evolutionary thinker and educator, she is co-founder and chairperson of the Foundation for Conscious Evolution. She is the producer and narrator of the award-winning documentary series entitled Humanity Ascending: A New Way through Together and has recently partnered with The Shift Network as a global ambassador for the conscious evolution movement; a shift from evolution by chance towards evolution by choice.

Along with Stephen Dinan, she has launched the “Agents of Conscious Evolution” training and is forming a global team to co-produce a global multi-media event entitled, “Birth 2012: Co-Creating a Planetary Shift in Time” on Dec. 22, 2012 (www.birth2012.com) — a historic, turning-point event; awakening the social, spiritual, scientific, and technological potential of humanity.

In 1984 her name was placed in nomination for the Vice Presidency of the United States on the Democratic ticket, calling for a “Peace Room” to scan for, map, connect and communicate what is working in America and the world. Barbara also co-chaired a number of Soviet-American Citizen Summits, introducing a new concept called “SYNCON to foster synergistic convergence with opposing groups. She developed SYNCON conferences to bring together opposing forces to discover the positive benefit of a long range earth-space development program where she worked with builders of the Space Shuttle and continued her passion for an expanded and peace generating space program.

She is a Fellow of The Club of Budapest, and has received an honorary PhD in Conscious Evolution from the Giordano Bruno GlobalShift University. She has established a Chair in Conscious Evolution at Wisdom University and is member of many progressive organizations, including Evolutionary Leaders Group, Global New Thought (AGNT), as well as, The World Future Society.

Speak The Whole Way Into Those That Love You