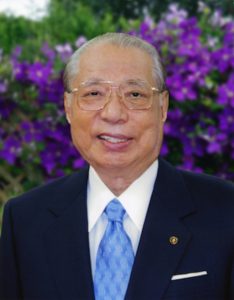 Example of Teaching
Humanity’s collective mission in the cosmos lies in the practice of compassion.

Unlocking the Mysteries of Birth & Death: . . . And Everything in Between, A Buddhist View Life

Daisaku Ikeda is a Buddhist philosopher, peacebuilder, educator, author and poet. He is the third president of the Soka Gakkai lay Buddhist organization and the founding president of the Soka Gakkai International (SGI), which is today one of the world’s largest and most diverse lay Buddhist organizations, promoting a philosophy of character development and social engagement for peace.

Ikeda was born in Tokyo, Japan, on January 2, 1928, the fifth of eight children, to a family of seaweed farmers. The devastation and senseless horror he witnessed as a teenager during World War II gave birth to a lifelong passion to work for peace, rooting out the fundamental causes of human conflict.

For much of his early life Ikeda struggled against ill health, nearly succumbing, in his teens, to the ravages of tuberculosis, one of the leading killer diseases at the time. In 1947, at the age of 19, he met Josei Toda (1900-58), educator and leader of the Soka Gakkai lay Buddhist society whose activities were based on the philosophy of the thirteenth-century Buddhist teacher and reformer Nichiren. Ikeda found in Toda an open and unaffected person, a man of unshakable conviction with a gift for explaining profound Buddhist concepts in logical, accessible terms. He soon found employment at one of Toda’s companies and later completed his education under the tutelage of Toda, who became his mentor in life.

In May 1960, two years after Toda’s death, Ikeda, then 32, succeeded him as president of the Soka Gakkai. Under his leadership, the movement began an era of innovation and expansion, becoming actively engaged in cultural and educational endeavors worldwide. Ikeda has dedicated himself to fulfilling Toda’s dreams by developing initiatives in the areas of peace, culture and education.

The central tenet of Ikeda’s thought, and of Buddhism, is the fundamental sanctity of life, a value which Ikeda sees as the key to lasting peace and human happiness. In his view, global peace relies ultimately on a self-directed transformation within the life of the individual, rather than on societal or structural reforms alone. This idea is expressed most succinctly in a passage in his best-known work, “The Human Revolution,” Ikeda’s novelization of the Soka Gakkai’s history and ideals: “A great inner revolution in just a single individual will help achieve a change in the destiny of a nation and, further, will enable a change in the destiny of all humankind.”

Daisaku Ikeda: ‘Create A World That Guarantees Everyone’s Right To Live In Dignity’

History of the SGI