By: Jason Dorrier:  Can you imagine telling someone a century ago that a hundred years hence a stack of electrified silicon would be studying for its medical exam? 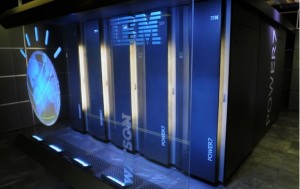 It’s the stuff of Star Trek. (“Computer? Early Grey, hot.”) And yet at the end of October, IBM announced its question answering machine Watson will begin study at the Cleveland Clinic Lerner College of Medicine of Case Western Reserve University. (Mouthful, huh?)

The students and staff at the Cleveland Clinic will do for Watson what the rest of us do for Google—hone its answering accumen by using it. In this case, Watson’s users will be a little more hands on, actually answering its questions and taking a red pen to its answers. See here for more on just how Watson will work with students and clinicians:

In IBM’s words, Watson is a “computer system that can directly and precisely answer natural language questions over an open and broad range of knowledge.” They call the system “Deep QA,” run it on an 80 teraFLOP/s computer in Yorktown Heights, New York, and used it to defeat a pair of Jeopardy!’s all-time best champions in 2011.

But Jeopardy! wasn’t the final goal; it was a proving ground. IBM has great expectationsfor Watson in medicine (Memorial Sloan Kettering and Wellpoint), finance (Citigroup), and beyond.

Watson’s latest project with the Cleveland Clinic is kind of a match made in heaven—medicine’s Dr. Watson and Sherlock Holmes. Physicians already think a lot like Watson does. A central medical skill is sifting the literature to form probabilistic logic chains backing a particular set of possible diagnoses. Watson does the same thing.

Problem is, humans lack the hardware to keep up with the literature. The total amount of medical information available doubles every five years. Worse, medical knowledge tends to go stale within four to eight years. Meanwhile, free time is a commodity most physician’s have precious little of—five hours a month at most.

What is that for the average human? Maybe most of a real page-turner? Never mind assimilating and retaining a hundred pages or more of dense technical text. Whereas on Jeopardy! Watson arrived at a particular answer (“question” in the game, of course) and simply buzzed in, the behind-the-scenes reasoning process was largely hidden. In the medical model, the reasoning process will be as important as the diagnosis. How can a doctor agree or disagree with his or her assistant without kicking the tires on their theory?

And that’s really the point. Watson will be a highly specialized medical search engine capable of human-like communication. Using Watson, a physician may uncover much of the same research he himself would have found, but he may yet find logically sound research that is new, compelling, and outside his purview.

Doctors will increasingly need only focus on keeping their rationality razor sharp and less so on maintaining an impossibly encyclopedic knowledge of medicine.

Watson (or some other system like Watson) could theoretically transform medicine by reducing the number of missed diagnoses due to our very human information limit. (There will be 200 times more medical data than a human could possibly process by 2020, according to IBM).

Might this tech someday make it into our homes and pair with an invention like that envisioned by the Tricorder X PRIZE? Probably not right away. The echoes of future lawsuits are loud enough to reach our ears even today.

But maybe eventually it goes home with a sturdy disclaimer, years of proven analysis, and a doctor backing it up. Watson could do a pre-visit check-up, and when you arrive at the doctor’s office, your doc gets right down to business. Or maybe after checking Watson’s analysis, he saves you the trip—two advils and a little rest! You’ll be fine.

Or maybe none of the above. The possible uses of AI-like software seem endless, but it’s the uses invisible to us that will be the most world shaking. As science fiction author, William Gibson, notes, “Any imaginary future…is written out of the zeitgeist.” And then almost immediately becomes obsolete.