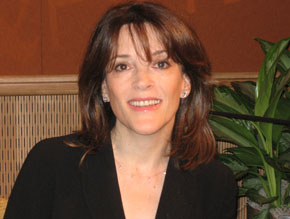 MARIANNE WILLIAMSON: I think the most significant political question now is not what’s happening inside of government, but rather what’s happening inside us. The Greek etymology of the word “politics” does not mean government but rather “of the citizens.” Just as medicine has been revolutionized by the holistic model in which we recognize that the spirit and mind are as important in healing as is the body, and even as business in America has been affected by the realization that no amount of money or external restructuring can substitute for real creative thinking, so I think that politics is the next realm to be transformed by the knowledge that what we’re experiencing within ourselves is as important to informing the society as is any material factor.

DR: How would you translate that idea into programs which can effectively serve the people?

MW: Concentrating on “programs that effectively serve the people” is analogous to giving medicine to the sick person in the allopathic western model of medicine. It’s analogous to a pill or an operation„seeking to fix the body without taking into account the mental and emotional state of the patient.

DR: So it has to go deeper.

MW: Yes. Government action has its place, of course, but it still speaks to the level of effect rather than cause. In medicine, we are expanding our focus beyond combating disease to the importance of stimulating healing. “What program? What program?” is like saying, “What pill? What operation?” But in the social body as in the physical body it is the immune system which we need to boost. In that sense the individual citizen is like the immune cell, and it is as though our immune cells are compromised. Most of our social ills can be likened to opportunistic infections that have destructive power only because the immune system is compromised.

DR: What kinds of things do you see happening today that you find most inspiring?

MW: People are tapping into one of the fundamental American ideals, the notion of personal and cultural re-invention. I see people re-inventing themselves. It is a fundamental legacy in the American psyche that we believe things can change. This country was founded on the notion that things did not have to continue to be the way they had been for hundreds or thousands of years, that we could do better. I see people all around me waking today from a long sluggish period in which we were so focused on things outside ourselves that we forgot our spirituality. I think that there’s a cultural awakening occurring in response to a great wave of darkness that would put us all to sleep.

DR: In your book Illuminata you speak very movingly about America and its potential. What is the American dream to you?

DR: And that was where happiness was to be found.

MW: Absolutely. Unity in diversity is an extraordinary concept, particularly today, when so many people forget the importance of either one element or the other. There are people in America who would stress our unity at the expense of our diversity, and others who would celebrate our diversity at the expense of our unity. Unity in diversity is the American principle. I think of myself these days as an Americanist. Our original ideals should be re-embraced.

MW: We seek to transform because it is so obvious that civilization is moving deeper and deeper into its own shadow. We resist transformation because we tend to be more afraid of life than of death.

DR: Tell us about your work with severely ill people.

MW: I’ve always said to groups with life-challenging illnesses: I am not your physician. Your physician knows about your disease. I am a metaphysician. My work has to do with stimulating the forces of healing. I have simply come to think that the principles involved there apply to social systems as much as to the human body.

DR: What role do you feel that volunteerism should play in our society?

MW: First of all, I think that the concept of tithing is a significant spiritual principle that should apply to more than just money. I think there must be outflow in order to create inflow, and this has to do not only with money but with energy of any kind. Secondly, I think that community itself is the field of light which protects us from and casts out all darkness. Volunteerism is a way of rebuilding community.

DR: A friend of mine recently attended a wedding where the vows were taken from your book Illuminata. Do you receive word about people utilizing the book for other ceremonies?

MW: Absolutely. People have told me they’ve used it for memorial services, for blessings on the newborn, rites of the elder, and the divorce ceremony. The only one that I have not heard much feedback about is the rites of puberty, but I hope I will.

DR: You first became well known for your book A Return to Love, which is about A Course in Miracles. The Course seems to demand great discipline of its students. Do you feel that people must follow it rigorously to derive benefit from it?

MW: That’s a tricky question, because it’s none of my business what people do. On the one hand, like any other course, the more we practice, the more we receive from the practice. On the other hand, the Course contains such profound material that a single sentence can cast light on the day.

DR: As part of the generation that came of age in the 1960s, looking back what were the most important lessons to be learned from that time, and how might we apply some of that now?

MW: The Sixties were an extraordinary time, in that there was a collective sense of hope. A critical mass of people accepted world peace as a genuine possibility. Granted, a lot of the people were stoned at the time, but to have even been part of a culture which embraced such a value leaves its mark on those who were part of it. The vision never gets entirely flushed out of you, even if you go on to deny it, or resist its call. After three decades, many people who saw the initial vision are seeing it again, and many who weren’t there in the Sixties are seeing it as well. Three is a magical number, you know. Will Rogers once said that every 30 years or so, Americans have to go sleep it off. We did sleep, but now we are waking.

Daniel Redwood, a chiropractor and writer who lives in Virginia Beach, Virginia, is the author of A Time to Heal: How to Reap the Benefits of Holistic Health. A collection of his writing is available on the WorldWideWeb at http://www.doubleclickd.com/danhome.html. He can be reached by e-mail at redwoods@infi.net.