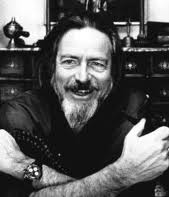 Example of Teaching
“Muddy water is best cleared by leaving it alone.”

The Way of Zen

Become What You Are

British born writer and philosopher Alan Watts was profoundly influenced by the East Indian philosophies of Vedanta and Buddhism, and by Taoist thought. By early 1970s, he was the foremost interpreter of Eastern philosophy for Western audience.

Watts was an early subject in pioneering psychedelic trials, and after recording two seasons of the public television series “Eastern Wisdom and Modern Life,” he traveled to Japan several times in the early sixties. By the late sixties he had become a counter culture celebrity, and traveled widely to speak at universities and growth centers across the US and Europe.

Watts was born in Kent, England in January of 1915 at the start of the first World War. At a young age he became fascinated with the arts of the Far East, and by the time he was ten or eleven he began to read thriller stories by Sax Rohmer about mysterious Oriental villains. This interest led him in turn to the works of Lafcadio Hern and DT Suzuki, and by fourteen was writing on Eastern themes. His first booklet on Zen was produced in 1932.

Watts moved to the United States in 1938 and began his Zen training in New York. He received his master’s degree in Theology from Seabury-Western Theological Seminary and became an Episcopal priest. He left the ministry in 1950  he never became a member of  another organized religion, although he wrote and spoke extensively about Zen Buddhism, Hinduism, and Taoisim. Some American Buddhists criticized him for not sitting regularly in zazen, even though he recorded several guided meditations teaching a variety of mediation techniques. Alan Watts responded simply by saying: “A cat sits until it is done sitting, and then gets up, stretches, and walks away.”

After leaving the ministry, Watts moved to upstate New York, and visited with writer Joseph Campbell and composer John Cage. A year later and moved to California, where he joined the faculty of the American Academy of Asian Studies, later becoming the Dean of the department.

In San Francisco, Watts gained a large following while working as a volunteer programmer at KPFA, the Berkeley free radio station. Watts wrote books and articles on subjects important to Eastern and Western religion, introducing the then-burgeoning youth culture to The Way of Zen (1957), one of the first bestselling books on Buddhism. Like Aldous Huxley before him, he explored human consciousness in the essay, “The New Alchemy” (1958), and in the book, The Joyous Cosmology(1962). Overall Alan Watts developed an extensive audio library of nearly 400 talks and wrote more than 25  books during his lifetime, including his final volume, Tao; the Watercourse Way.

Towards the end of his life, he divided his time between a houseboat in Sausalito and a cabin in nearby Mount Tamalpais. His legacy has been kept alive by his son, Mark Watts, and by many of his recorded talks and lectures that have found new life on the Internet.

The 5 Most Important Lessons of The 21st Century – Alan Watts

Watch Alan Watts’ Powerful Speech On The Higher Self