by: Jason Dorrier:  Radio telescopes have been sifting the stars since 1937. Most slowly scan a small percent of the sky. But that’s about to change. 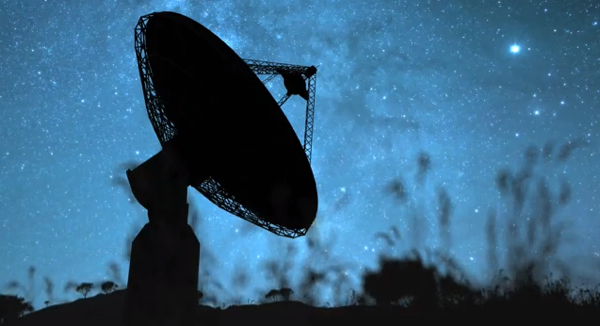 A new radio telescope will be the fastest sky surveyor yet—and it’s part of a larger project to build an even faster 3,000 kilometer array. Astronomers will study the earliest star and galaxy formation, test the theory of general relativity, and even search for Earth-like planets outside the solar system. Until only recently, telescopes this powerful weren’t feasible due to the massive amounts of data collection, storage, and analysis required.

The Australia Square Kilometre Array Pathfinder (ASKAP), officially opened October 5th, will be the fastest, most sensitive radio telescope in the world when it is fully operational next year. But ASKAP is just the opening act. If all goes to plan, by 2024, ASKAP will be expanded in Australia and linked to other sites in South Africa to create the Square Kilometre Array (SKA)—50 times more sensitive and 10,000 times faster than any telescope in existence.

But let’s not get ahead of ourselves. In 2012, the $155 million ASKAP represents the next big thing in radio astronomy. 350 astronomers from 150 institutions have bookedtelescope time in the next five years to study pulsars, galaxy formation and evolution, transient radio sources, and magnetic fields.

The array is located outside Murchison, Western Australia, 700 kilometers north of Perth in a “pristine radio quiet environment” called the Mid West Radio Quiet Zone. An area the size of Costa Rica with a population of 120 people, Murchison is an ideal spot to listen for the faint radio signals emitted by distant stars and galaxies. ASKAP is comprised of 36 antennas 12 meters wide and three stories high. Each antenna uses a Phased Array Feed “radio camera”—a new generation technology that widens the telescope’s field of view to “about 150 times the area of the full moon.” A huge improvement over existing radio telescopes.

But expanded field of view would go to waste if ASKAP couldn’t handle prodigious amounts of data. Project director Dr. Brian Boyle says their system will run more data the first day than currently exists in “all of radio astronomy archives around the world today.”

To accommodate all that data ASKAP needs computing power. Supercomputing power, in fact. The brains of the telescope will be a 1.2 petaFLOP/s Cray—which would rankfourteenth fastest supercomputer in the world as of June 2012.

But peering a decade down the road, things get even more exciting. The technologies used in ASKAP are but prototypes for a radio telescope orders of magnitude more powerful—the Square Kilometre Array. The Square Kilometre Array (SKA) will be an internationally funded $2 billion network of several thousand linked radio sensors spread over 3,000 kilometers.

As you might imagine, SKA’s data requirements will far outstrip even ASKAP. The telescope will generate up to a few exabytes of data per day—more than that generated by current daily internet traffic—and will require 80,000 kilometers of fiber optic cable to connect its components.

To handle such mindboggling data flows, SKA leadership hired IBM, in partnership with ASTRON, to build an exascale computer—100 times more powerful than the most powerful supercomputer in 2012 (Cray’s Titan). Further, SKA will require 300 to 1500 petabytes of data storage per year. Compare that to the mere 15 petabytes CERN’s Large Hadron Collider (LHC) stores per year.

Tom Engbersen of IBM sums it up, “This is big data analytics to the extreme. With DOME [the initial five year study] we will embark on one of the most data intensive science projects ever planned, which will eventually have much broader applications beyond radio astronomy research.” Here’s a video on just how much scientists hope to learn from SKA observations.