BEBIONIC: BIONIC HANDS ARE GETTING CLOSER TO THE REAL THING

by: Peter Murray:  The bebionic is tightening its grip on its reputation as one of the world’s most advanced prosthetic hands. 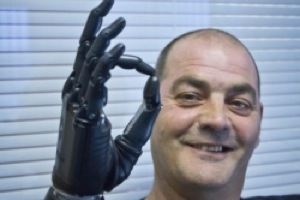 Watching a recent video of an amputee with the bebionic and it’s clear that bionics are nearing the point where they are no longer awkward and insufficient substitutes but life-changing replacements that give back much of what was so dearly lost.

Nigel Ackland’s hand was crushed in an industrial mixer while working as a metal smelter about five years ago. After the accident he went through a series of attachments of limited use, from a passive, purely cosmetic hand, to a hook opened and closed with a harness attached to his body, to electrical pinchers called a griefer. Dissatisfied, Ackland could only tolerate the griefer, but still its limited functionality and robotic appearance left him wanting something better.

Ackland was recently fitted with the latest bebionic, version 3, and he loves it. Developed by assistive technologies manufacturer RSL Steeper, the v3 is a myoelectric hand, controlled by the movement and electrical activity of two underlying intact muscles of the amputated arm. It sports 14 distinct grips including a strong grip of 31.5 pounds, up from the previous version’s handshaking strength of 16.8 pounds. And it can lift up to 99 pounds, up from the 70.5 pounds lifting power of v2. A very happy Ackland shows off his new egg-cracking skills in the following video, later to finish it off with his beer pouring skills.

Even though the hand has 14 different grip settings, Ackland, commenting on the company’s website, claims he has added another: “I’m back to being a two finger typist and can even do a very interesting hand signal which I call the 15th function, not particularly functional perhaps, but the psychological benefit is immense!”

The Bebionic’s standard glove, the skin-like multi-layered silicone material that fits over the hand and comes in 19 different shades, gives the hand an amazingly realistic look and feel. Ackland actually thinks it looks “too real” and opts to wear the prosthetic hand gloveless and metal bared.

RSL Steeper isn’t the only company pumping its bionic fist. Touch Bionics’ i-limb ultra is another very capable myoelectric hand available to amputees. Like the bebionic it has individual digit control for fine movement and a powerful grip. But patients – and their insurance companies – won’t get the prosthetics for cheap. Both the Bebionic v3 and i-limb are between $15,000 and $25,000. 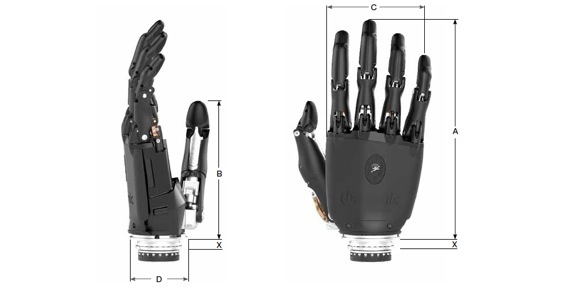 While myoelectrical prosthetics like the Bebionic are improving, other bionics developers continue to develop prosthetics that tap the body’s natural signals – the electrical activity of neurons. Connecting those severed and damaged neurons to a bionic limb could not only reconnect control back to their nervous systems, but could potentially also relay sensory signals back to the brain and allow amputees to feel, say, the warmth of a coffee mug or the cold of a bowl of ice cream in their prosthetic hands. But creating an effective nerve-device interface is an incredible technical challenge.

Scientists at the Sandia National Laboratories at the University of New Mexico have come up with a new way that may make neuronal-device interfaces effective enough to faithfully relay the signals of a neuron to the wiring of a prosthetic. Their breakthrough is a technique called electrospinning, a nanotechnolgy-based technique that faithfully connects neurons and electrodes. The work, still in early, proof-of-principle stages, has only been shown to work in a Petri dish. But it could one day allow amputees neuronal control of their prosthetics for years without the need for repeat surgeries, according to the Sandia researchers.