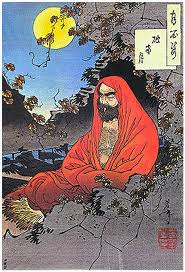 Example of Teaching
“A Buddha is someone who finds freedom in good fortune and bad.”

The Zen Teaching of Bodhidharma

Tracking Bodhidharma: A Journey to the Heart of Chinese Culture

Indian monk, Bodhidharma is credited with bringing Ch’an and Zen Buddhism to China and is the first Patriarch of Chinese Zen lineage.

Both Ch’an and Zen are renditions of the Pali word ‘Jhana’ and the Sanskrit word ‘Dhyana’ which means meditation. The name Bodhidharma is composed of two Sanskrit words. The word Bodhi refers to the Ch’an/Zen Buddhists’ definition of the Ultimate Reality, or the Buddha Nature. Dharma is a Sanskrit word that equates with Tao. However when both words are read together, Bodhidharma would mean the Propensity of the Mind or Bodhi Essence.

Third son of a Brahmin caste Pallava king in Kanchipuram, Southern Indian, Bodhidharma was very intelligent and his father’s favorite. He had two older brothers who feared that their father, the king, would pass them over and bequeath the kingship to Bodhidharma. In their jealousy, the two older brothers often disparaged Bodhidharma and also attempted to assassinate him. But Bodhidharma had good karma and the attempts were not successful. Bodhidharma realized that he was not interested in a life of politics. He chose instead to study with Buddhist master, Prajnatara, the 27th Patriarch of Indian Buddhism. The master gave him the name Bodhidharma and made him the 28th Patriarch of Buddhism in an uninterrupted line that extends all the way back to the Buddha himself.

After many years of training, Bodhidharma one day asked his master, “Master, when you pass away, where should I go? What should I do?” His master replied that he should go to Zhen Dan, which was the name for China at that time. Years later, Bodhidharma’s master passed away and Bodhidharma prepared to leave for China.

In 527 AD, 32 years after Ba Tuo’s founding of the Shaolin temple, Bodhidharma crossed through Guangdong province into China. In China, he was known as Da Mo. and started practicing Da Sheng (Mahayana) Buddhism. He was greeted ceremoniously by large crowds of people who had heard of him. But rather than speak, Da Mo sat down and began meditating for many hours. Upon completing his meditation, Da Mo rose and walked away, saying nothing.

His actions had a profound effect upon his audience. they laughed and cried and some were angry. Regardless of the emotion, everyone in the crowd had a reaction.

Da Mo/Bodhidharma’s fame drew the interest of Emperor Wu, a devout Buddhist who ruled over the southern kingdom of China. The Emperor asked Da Mo if there was Buddha in this world. Da Mo replied that there was not. When one asks if there is Buddha in the world, then one has already answered the question: Buddha is a matter of faith, you either believe in your heart or you do not. In questioning the existence of Buddha, Emperor Wu had demonstrated a lack of faith. The enraged Emperor ordered Da Mo to leave his palace and never return.

Da Mo simply smiled, left the palace and continued north until he arrived at the Shao Lin Temple in Ho Nan Province. It was here that Bodhidharma became famous for meditating 9 years facing a wall. Here Da Mo taught his disciple Shen Guang the most important of lessons in a mind-to-mind, heart-to-heart communication known as”action language” and is the foundation of the Chan Buddhism which Da Mo began at the Shaolin Temple.

After his realization, Shen Guang was given the name Hui Ke and he became abbot of the Shaolin temple after Da Mo.

Among his teachings, an important text is the Lankavatara Sutra (the holy grail of Zen Buddhism).  A sutra of Mahayana Buddhism the text recounts teachings between the Buddha and a bodhisattva named Mahāmati (“Great Wisdom”). The sutra is set in Lanka (now called Sri Lanka)  the island fortress capital of demon king Ravana. The sutra’s most important doctrine is that of consciousness, which is the base of the individual’s deepest awareness and his tie to the cosmic. It also asserts that all the objects of the world, and the names and forms of experience, are merely manifestations of the mind. The Lankavatara Sutra figured prominently in the development of Chinese, Tibetan and Japanese Buddhism and is notably an important sutra in Chinese Cha’an and Japanese Zen.

Bodhidharma, gave a copy of Lankavatara Sutra to his successor, Hui-k’o, and told him everything he needed to know was in this book. His major teaching focuses on the two paths to enter Dharma Gate: Study and Practice. Study: through Buddhist sutras and scriptures, to understand Buddha Nature. Your Buddha Nature doesn’t manifest because it is clouded by defilements, such as greed, attachment, passion, aggression and ignorance. Practice: when you follow Buddhist principles in your daily life, you discover that your Buddha Nature is equal to the Buddha’s. His teachings included:
Bao Yen Hsin: The willingness to accept, without complaining, suffering and unhappiness because you understand it is your own karma.
Sui Yen Hsin: Understanding that all situations are the consequences of karmic causes, and therefore, you maintain equanimity in all circumstances, both negative and positive.
Tsung Fa Hsin: Realizing through practice the essence of your Buddha Nature, which is equanimity.

Throughout Buddhist Art, Bodhidharma is referred to as The Blue-Eyed Barbarian and depicted as a rather ill-tempered, bearded and wide-eyed. Several stories about Bodhidharma have become popular legends, which are still being used in the Ch’an and Zen-tradition.

How Bodhidharma and his Buddhism disappeared from Tamil Nadu?