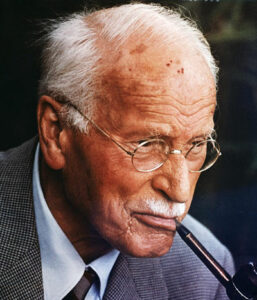 Example of Teaching
“Your vision will become clear only when you can look into your own heart. Who looks outside, dreams; who looks inside, awakes.”

The Red Book: A Reader's Edition

Carl Gustav Jung is regarded as one of the best known contemporary contributors to dream analysis and symbolization. Founder of analytical psychology, he developed the concepts of the extraverted and the introverted personality, archetypes, and the collective unconsciousness.

Central to his concept was the theory of individuation, which propels each of us toward a greater wholeness: a psychological process of integrating the opposites, including the conscious with the unconscious while still maintaining their relative autonomy.

Jung reminded us that our own wholeness and the healing of the world soul, the anima mundi, are dependent upon each one of us developing a more conscious relationship with those unexplored or rejected parts of ourselves which lie hidden in the unconscious and which he termed the shadow.

Although considered a scientist, Jung was more interested in exploring tangential areas, including Eastern and Western mythology, alchemy ,anthropology and astrology. He saw the human psyche as “by nature religious” and made this religiousness the focus of his explorations.

Jung was born in Kesswil, Switzerland on July 26, 1875. His father was a pastor in the Swiss Reformed Church, and his mother came from a family of clergymen. At an early age Jung was captivated by his dreams and inner life which led him to embark on a journey of self-discovery, and he began to question the beliefs of the Protestant tradition in which he had been steeped.

Jung was gifted with an inquisitive intellect, and at a young age commenced on a journey to explore the nature of the human psyche. He read extensively from the works of Goethe, Kant, Schopenhauer, and Meister Eckhart. Although he was interested in religious thought, philosophy, and archaeology, he chose to pursue a degree in medicine and decided to specialize in psychiatry upon his graduation from the University of Basel.

At the Burgholzli hospital in Zurich, a center known for the treatment of schizophrenia, Jung found the ideal place to begin his life’s work. Here, his psychological research, hypnosis, and other early forms of psychotherapeutic treatment were encouraged.

Jung left the Burgholzli in 1909 to devote himself to his private practice and to the study of collective expressions of the unconscious, such as mythology, folklore and religion. He compared these products of the collective unconscious and subjected them to analytic understanding, an approach he named comparative method amplification.

His first, ambitious amplification was Transformations and Symbols of the Libido. The decision to publish this now classic work was a painful one for Jung as it strained his relationship with Sigmund Freud. It clearly differed from Freud’s views of of the nature and role of the unconscious, complexes, and libido.

The break with Freud left Jung isolated both professionally and personally and resulted in an inward journey he called his “confrontation with the unconscious.” He explored the depths of his own psyche in order to discover his own myth. He developed a method called active imagination, a process where a person encounters the living reality of the non-ego through dialogue and other forms of imaginative engagement with fantasy or dream figures. This self-investigation process became the centerpiece of Jung’s approach to the psyche.

After a long lifetime dedicated to the understanding and healing of the human psyche, Jung died on June 6, 1961 in Kusnacht, Switzerland. His dreams at the end expressed grave concern for the well-being of the world, and also confirmed the achievement of a personal wholeness to which he was devoted during his entire life.

Jung In The Jungle: What The Brew Ayahuasca Taught Me About My Shadow

The Making of The Red Book