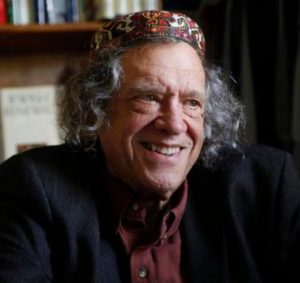 Example of Teaching
“A spiritual sensibility encourages us to see ourselves as part of the fundamental unity of all being.

If the thrust of the market ethos has been to foster a competitive individualism, a major thrust of many traditional religious and spiritual sensibilities has been to help us see our connection with all other human beings.”

Embracing Israel/Palestine: A Strategy to Heal and Transform the Middle East

Political activist Michael Lerner is the Rabbi of Beyt Tikkun synagogue and editor of Tikkun,  a progressive Jewish interfaith magazine, both based in Berkeley, California. The magazine is controversial because of its stand in favor of the rights of Palestinians.

Lerner grew up in the Weequahic section of Newark, New Jersey. He attended the Far Brook Country Day School, a private school known for interdenominational  Christianity. While being heavily exposed to Christian-oriented cultural activities, he also attended Hebrew school three times a week. Lerner received a B.A. from Columbia University, a PhD in philosophy from University of California, Berkeley and a second PhD in Clinical/Social Psychology from Berkeley’s Wright Institute.

Lerner became a leader and an activist in the Berkeley student movement and the Free Speech Movement. He later taught philosophy of law at San Francisco State University and as an Assistant Professor of Philosophy at the University of Washington taught ethics, social and political philosophy, literature and culture.

In 1976 Lerner founded the Institute for Labor and Mental Health to work with the labor movement and do research on the psychodynamics of American society A year later he received a grant from the National Institute of Mental Health that allowed him to study American politics. He reported that “a spiritual crisis” was at the heart of the political transformation of American society as well as at the heart of much of the psychic pain that was being treated in individual therapy.

Lerner received rabbinical ordination in 1995 and his synagogue Beyt Tikkun became an embodiment of what he described as “neo-Hasidism,” passionately pursuing the spiritual dimension of the prayers rather than rushing through them. The goal, he insisted, is to connect to God and not simply to mouth every prayer in the prayerbook. His synagogue grew, according to members, not only because of Lerner’s willingness to take the social justice message of the prophets seriously, but also because the actual experience of being involved in prayer, meditation, singing and dancing.

Lerner is a member of the Board of Rabbis of Northern California. He is also a member of Ohalah, the organization of Jewish Renewal Rabbis. In 2005 he became chair of The Network of Spiritual Progressives whose mission was to “challenge the materialism and selfishness in American society and to promote an ethos of love, generosity, and awe and wonder at the grandeur of the universe.”

Rabbi Michael Lerner Ph.D. A World Based on Generosity

From What Is to What Ought to Be

Bringing God Into It

How to stop the Middle East craziness in Israel, Palestine,

Banning Guns Is Necessary But Not Sufficient

Left Hand of God: Responding to the Religious Right