Taking a Stand for Office Ergonomics

By STEVE LOHR:  THE health studies that conclude that people should sit less, and get up and move around more, have always struck me as fitting into the “well, duh” category. 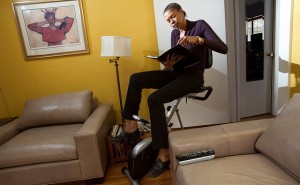 But a closer look at the accumulating research on sitting reveals something more intriguing, and disturbing: the health hazards of sitting for long stretches are significant even for people who are quite active when they’re not sitting down. That point was reiterated recently in two studies, published in The British Journal of Sports Medicine and in Diabetologia, a journal of the European Association for the Study of Diabetes.

Suppose you stick to a five-times-a-week gym regimen, as I do, and have put in a lifetime of hard cardio exercise, and have a restingheart rate that’s a significant fraction below the norm. That doesn’t inoculate you, apparently, from the perils of sitting.

The research comes more from observing the health results of people’s behavior than from discovering the biological and genetic triggers that may be associated with extended sitting. Still, scientists have determined that after an hour or more of sitting, the production of enzymes that burn fat in the body declines by as much as 90 percent. Extended sitting, they add, slows the body’s metabolism of glucose and lowers the levels of good (HDL) cholesterol in the blood. Those are risk factors toward developing heart disease and Type 2 diabetes.

“The science is still evolving, but we believe that sitting is harmful in itself,” says Dr. Toni Yancey, a professor of health services at the University of California, Los Angeles.

Yet many of us still spend long hours each day sitting in front of a computer.

The good news is that when creative capitalism is working as it should, problems open the door to opportunity. New knowledge spreads, attitudes shift, consumer demand emerges and companies and entrepreneurs develop new products. That process is under way, addressing what might be called the sitting crisis. The results have been workstations that allow modern information workers to stand, even walk, while toiling at a keyboard.

Dr. Yancey goes further. She has a treadmill desk in the office and works on her recumbent bike at home.

If there is a movement toward ergonomic diversity and upright work in the information age, it will also be a return to the past. Today, the diligent worker tends to be defined as a person who puts in long hours crouched in front of a screen. But in the 19th and early 20th centuries, office workers, like clerks, accountants and managers, mostly stood. Sitting was slacking. And if you stand at work today, you join a distinguished lineage — Leonardo da Vinci, Ben Franklin, Winston Churchill, Vladimir Nabokov and, according to a recent profile in The New York Times, Philip Roth.

DR. JAMES A. LEVINE of the Mayo Clinic is a leading researcher in the field of inactivity studies. When he began his research 15 years ago, he says, it was seen as a novelty.

“But it’s totally mainstream now,” he says. “There’s been an explosion of research in this area, because the health care cost implications are so enormous.”

Steelcase, the big maker of office furniture, has seen a similar trend in the emerging marketplace for adjustable workstations, which allow workers to sit or stand during the day, and for workstations with a treadmill underneath for walking. (Its treadmill model was inspired by Dr. Levine, who built his own and shared his research with Steelcase.)

The company offered its first models of height-adjustable desks in 2004. In the last five years, sales of its lines of adjustable desks and the treadmill desk have surged fivefold, to more than $40 million. Its models for stand-up work range from about $1,600 to more than $4,000 for a desk that includes an actual treadmill. Corporate customers include Chevron, Intel, Allstate, Boeing, Apple and Google.

“It started out very small, but it’s not a niche market anymore,” says Allan Smith, vice president for product marketing at Steelcase.

The Steelcase offerings are the Mercedes-Benzes and Cadillacs of upright workstations, but there are plenty of Chevys as well, especially from small, entrepreneurial companies.

In 2009, Daniel Sharkey was laid off as a plant manager of a tool-and-die factory, after nearly 30 years with the company. A garage tinkerer, Mr. Sharkey had designed his own adjustable desk for standing. On a whim, he called it the kangaroo desk, because “it holds things, and goes up and down.” He says that when he lost his job, his wife, Kathy, told him, “People think that kangaroo thing is pretty neat.”

Today, Mr. Sharkey’s company, Ergo Desktop, employs 16 people at its 8,000-square-foot assembly factory in Celina, Ohio. Sales of its several models, priced from $260 to $600, have quadrupled in the last year, and it now ships tens of thousands of workstations a year.

Steve Bordley of Scottsdale, Ariz., also designed a solution for himself that became a full-time business. After a leg injury left him unable to run, he gained weight. So he fixed up a desktop that could be mounted on a treadmill he already owned. He walked slowly on the treadmill while making phone calls and working on a computer. In six weeks, Mr. Bordley says, he lost 25 pounds and his nagging back pain vanished.

He quit the commercial real estate business and founded TrekDesk in 2007. He began shipping his desk the next year. (The treadmill must be supplied by the user.) Sales have grown tenfold from 2008, with several thousand of the desks, priced at $479, now sold annually.

“It’s gone from being treated as a laughingstock to a product that many people find genuinely interesting,” Mr. Bordley says.

There is also a growing collection of do-it-yourself solutions for stand-up work. Many areposted on Web sites like howtogeek.com, and freely shared like recipes. For example, Colin Nederkoorn, chief executive of an e-mail marketing start-up, Customer.io, has posted one such design on his blog. Such setups can cost as little as $30 or even less, if cobbled together with available materials.

UPRIGHT workstations were hailed recently by no less a trend spotter of modern work habits and gadgetry than Wired magazine. In its October issue, it chose “Get a Standing Desk” as one of its “18 Data-Driven Ways to Be Happier, Healthier and Even a Little Smarter.”

The magazine has kept tabs on the evolving standing-desk research and marketplace, and several staff members have become converts themselves in the last few months.

“And we’re all universally happy about it,” Thomas Goetz, Wired’s executive editor, wrote in an e-mail — sent from his new standing desk.