The Power of Tithing

Edwene Gaines:  by Carol A. Ward: Something wonderful and affirming happened to me this past month, and I’d like to share it with you. 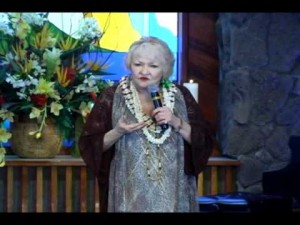 I’ve been listening to The Four Spiritual Laws of Prosperity by Edwene Gaines, who teaches that tithing is the first step toward coming into your own true prosperity.  Tithing is the act of dividing ten percent of your total income…not just your wages, but every cent of money you receive, including gifts, allowances, or even coins found on the sidewalk…and giving this ten percent to wherever you receive your spiritual food.  This could be to your church, temple, guru, or even a friend or stranger who gave you some really good, life affirming advice.  The act of tithing is an act of gratitude, and of faith.  We give thanks for our blessings, and have faith that we will be provided for.

Now, the idea of tithing always sent shivers of resistance running through me.  After all, how could I possibly tithe ten percent of my income when it was so small?  How was I going to eat, pay the bills, and put gas in my car if I gave so much of my income away?  I did give to the places that I received my spiritual food, but it was always three dimes, three quarters, or even three dollars when I was feeling a little less pinched financially.  (I like to do things in threes.)  I felt that my act of thanks, no matter how small, would suffice, and that the Universe would understand that I was doing all I could, and work to keep me going.  Month in and month out, however, my offertory gifts remained very small, which was a direct reflection of my small income.

I attend Renaissance Unity in Warren, Michigan, and earlier this summer I committed to participate in their Summer Unexpected Income Program in which I offer a prayer treatment every morning, spend a few moments connecting energetically with all the others who are participating, and when unexpected money comes in, I give ten percent to the church.  I wasn’t terribly diligent in doing the prayer treatment every morning, but I did do it when I thought about it.  I received $50.00 of unexpected income in July, and happily placed a check for $5.00 in the offertory envelope that Sunday.  You know what?  It felt good!  Granted, it was a tiny amount, but I was staying in my integrity and keeping my promise.

Edwene Gaines is truly inspirational, and while listening to her talk about tithing a couple weeks ago, I made a firm commitment that starting right here, right now; I would devote that ten percent, no matter what!  I have this ability that when I earmark money for something, it doesn’t get touched for any other purpose.  I don’t care if I go hungry, that money stays put until it can be used for the purpose it was intended.  So, this past Sunday, I can happily say that — regardless of how much my mind was screaming at me that I could be buying groceries or filling my gas tank with that money – I blessed the ten percent and placed it in the collection bag at church, along with sincere, warm gratitude that I had had it to give.

Later that afternoon, as I left my boyfriend’s house, I stopped at the corner gas station near his apartment to feed the tank.  There was a gentleman at the pump next to mine who had warm, friendly energy, and as I passed by him to pay for the gas, we said a nice greeting to each other.  When I returned to the pump, he exclaimed that he had locked his keys in the car, along with his cell phone so that he couldn’t even call his wife to ask her to bring duplicates.  I leant him my cell phone, but when he tried to call home, his wife didn’t pick up.  Then I did something that I never, ever, ever do.

It was raining, and I was feeling so good from my experience at church, that I offered him a ride to get his keys.  He looked surprised, and accepted my offer, saying that he would pay me for my trouble.  I immediately protested, but he insisted.  Since one of the things that I am trying to master in my life is receiving, I finally accepted, so he folded up a bill and stuck it in my visor.  He thanked me for my kindness, and I told him my philosophy that we’re all in this together, and we should help each other when we can.  As we approached his house, he indicated the driveway I was to turn into, and when I did I was stunned at what I saw.  His house was huge.  It was not just huge, it was HUGE!  All I could say was, “Prosperity is a good thing!”  He chuckled and indicated that yes, it was.

When I dropped him back off at the gas station, he thanked me again, and remarked that he hoped to see me again, said “God bless you,” and shut the door.  Luckily, the voice called ‘opportunity’ nudged me from deep inside, (another thing that I’m working on is listening to it,) and I pulled back around before he pulled out and we exchanged cards.  He said that he and his wife could both use massages, and tucked my card in his wallet.  When I got home, feeling all warm and glow-y after doing a good deed, and having a great day, I looked at the bill in the visor.  He had left me $20.00, which paid for my gas.  I went in the house and promptly put $2.00 in my tithing envelope!

Edwene said to give the blessings some time to manifest after we begin to tithe.  She personally gave God six months.  My blessings, I have no doubt, began that very afternoon with a wonderful gathering of friends, a lovely encounter with a kind and generous stranger, a free tank of gas, and the potential for two new clients for my massage business!  Life is good, and it just keeps getting better and better!