by Pete Danko:  A garment whose very fibers generate power from the sun? 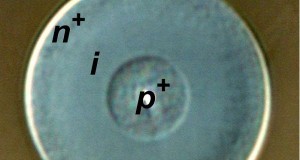 That’s a lot different than the panel-decorated solar clothing we’ve seen before, but it’s just one of the possibilities researchers are spinning out after reporting a breakthrough in creating silicon-based optical fiber with photovoltaic capabilities that can be made to great lengths.

Penn State University, home to the lead researcher on the project, says the team has used “high-pressure chemistry techniques” – the same sort they employed earlier to merge optical fibers with electronic chips – ”to make a fiber out of crystalline silicon semiconductor materials that can function as a solar cell (and) generate electrical power by converting solar radiation into direct-current electricity.”

And it’s thinner than the width of a human hair.

“Our goal is to extend high-performance electronic and solar-cell function to longer lengths and to more flexible forms. We already have made meters-long fibers but, in principle, our team’s new method could be used to create bendable silicon solar-cell fibers of over 10 meters in length,” John Badding, a Penn State professor of chemistry, said in a statement. “Long, fiber-based solar cells give us the potential to do something we couldn’t really do before: We can take the silicon fibers and weave them together into a fabric with a wide range of applications such as power generation, battery charging, chemical sensing and biomedical devices.”

We’ve seen some pretty darn flexible solar panels before, and they’ve been integrated into everything from jackets to ski helmets to messenger bags, to varying degrees of aesthetic and/or utilitarian success. But overall, the stuff seems not to have really taken off, as evidenced by the fate of Konarka, the bankrupt Massachusetts company whose nifty pliable solar material won it big venture capital backing – and even support from the state’s severely conservative governor – but apparently not enough customers.

But bendy though those solar cells might have been, they weren’t anything like what these researchers are working toward. They’re talking about woven, fiber-based solar cells that they imagine “would be lightweight, flexible configurations that are portable, foldable and even wearable,” Badding says. And you could hook the power-generating thing (whatever form it might take) right into a gizmo to charge batteries. “The military especially is interested in designing wearable power sources for soldiers in the field,” Badding says.

You bet they are – and so far all they’ve got going are the flexible panels, put onto backpacks or worn something like a vest.

Another advantage of these super-thin solar fibers pointed to by the researchers: “A typical solar cell has only one flat surface,” Badding said. “But a flexible, curved solar-cell fabric would not be as dependent upon where the light is coming from or where the sun is in the horizon and the time of day.”

Great as all this sounds, Penn State didn’t say how efficient these systems might be, nor did it speculate as to how long they researchers think it will take  to turn their research breakthrough into reality.