by: David J. Hill:  It’s no surprise that the first wave of robots that people have welcomed into their homes were charged with the menial task of cleaning. 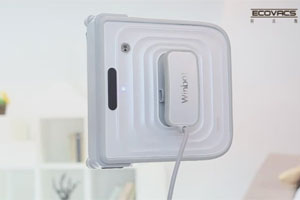 Now that iRobot’s Roomba has effectively quenched any fears about living with a robot, Chinese-based Ecovacs is ready to introduce another cleaning robot into your humble abode: the window-cleaning robot, Winbot.

Winbot works similarly to others cleaning bots in that it first maps out the scale of the surface to clean and then programs a path to track. Ecovacs has redesigned the Winbot to use suction instead of previous models that relied on magnets and two robots on either side of the window. It generates only 55 decibels during operation and can hold up to 37 pounds (17 kg). A safety pod also can also be attached to the window to prevent Winbot from crashing to the floor should the bot lose suction. Even though its batteries have now been replaced with a power cord attached, the new Winbot looks sleek and relatively easy to use.

The company’s infomercial for Winbot recently appeared on Mashable and it’s worth a look to see how well it appears to function:

Winbot will be appearing at next year’s Consumer Electronics Show, and hopefully a price will have been announced by then.

In addition to Winbot, Ecovacs has put together an entire line of household robots: the vacuum cleaner Deebot, the air purifying Atmobot, and Famibot, a telepresence bot equipped with motion detectors so it can serve as a sentry and send a text message to the homeowner should anything odd occur. With many companies looking to get robots into people’s homes, the competition is ramping up.

Winbot may not be the only window cleaning robot around, but it has the potential to become the de facto bot, if the price point is right. That could be tough as consumers don’t wash their windows nearly as often as they have to clean floors. Still, if Ecovacs can break into the US market with Winbot, then its full product line could get more traction.

We’ll have to wait until next year to see if Winbot can be a winner.