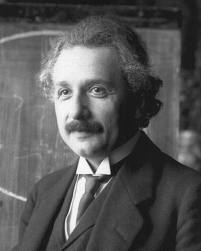 Example of Teaching
“A man should look for what is, and not for what he thinks should be.”

Einstein: His Life and Universe

Albert Einstein (1879–1955) was a renowned theoretical physicist of the 20th century, best known for his theories of special relativity and general relativity. He also made important contributions to statistical mechanics, especially his treatment of Brownian motion, his resolution of the paradox of specific heats, and his connection of fluctuations and dissipation. Despite his reservations about its interpretation, Einstein also made seminal contributions to quantum mechanics and, indirectly, quantum field theory, primarily through his theoretical studies of the photon.

After World War II, Einstein was a leading figure in the World Government Movement, he was offered the Presidency of the State of Israel, which he declined, and he collaborated with Dr. Chaim Weizmann in establishing the Hebrew University of Jerusalem.

Einstein always appeared to have a clear view of the problems of physics and the determination to solve them. He had a strategy of his own and was able to visualize the main stages on the way to his goal. He regarded his major achievements as mere stepping-stones for the next advance.

Albert Einstein received honorary doctorate degrees in science, medicine and philosophy from many European and American universities. During the 1920’s he lectured in Europe, America and the Far East and he was awarded Fellowships or Memberships of all the leading scientific academies throughout the world.

Einstein emigrated to the United States in the autumn of 1933 and took up residence in Princeton, New Jersey and a professorship at the prestigious Institute for Advanced Study.

Today, the practical applications of Einstein’s theories include the development of the television, remote control devices, automatic door openers, lasers, and DVD-players. Recognized as TIME magazine’s “Person of the Century” in 1999, Einstein’s intellect, coupled his strong passion for social justice and dedication to pacifism, left the world with infinite knowledge and pioneering moral leadership.

A Letter From Albert Einstein To His Daughter: About The Universal Force Which Is LOVE

The Secrets of Einstein’s Brain

The Extraordinary Genius of Albert Einstein