by the Sikh Missionary Society: Guru Nanak Dev stayed with Bhai Lalo when he began his preaching missions.  Bhai Lalo was a carpenter who earned his living honestly by working hard all day.  The local village official was a corrupt person. 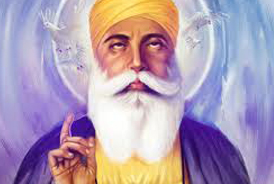 He was known as Malik Bhago.  One day he invited every resident of the village to a feast so he could make a good impression on the people.  Guru Nanak Dev declined to go to the feast.  Special messengers were sent to bring him. Bhago offered delicious food to the Guru and in response to his offer, waited for good words from him.  Guru Nanak Dev rather than blessing Malik Bhago declined to accept any food from him.  Bhago was surprised to hear a refusal for the delicious food and he immediately asked the reason for the refusal. The Guru told him that the food which Malik Bhago considered to be tasty and sweet was, in fact, made from the blood of the poor.  Malik Bhago had been extracting money from the people, instead of living on his honest earnings.  Bhago was very much embarrassed by the bold and frank comments of the Guru.  Everyone else appreciated the truth fearlessly spoken by Guru Nanak Dev.  Bhago could not deny the allegations made against him at his face in the presence of the respectable people of the village.  Good senses prevailed and Malik Bhago confessed his guilt.  He requested to be pardoned for his past deeds and promised to live a true and honest life in the future.

Guru Nanak Dev told the gathering there that only honestly earned food, as that of Bhai Lalo, tastes good and sweet like milk.  All dishonest earnings are the blood of the innocent.  If drops of blood fall on a cloth, it becomes dirty.  How can the mind of a person who lives on the blood of the helpless people remain pious and clean?

Such was the effect of Guru Nanak’s piety and personality that people did visualize blood in Malik’s delicious dinner and milk in Bhai Lalo’s frugal meal.

Taking away the rights of others is like drawing their blood, it pollutes the mind.  Honest earnings are like sweet milk, they make the mind pious.