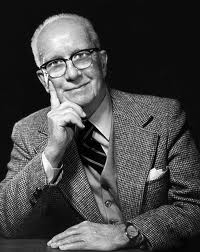 Example of Teaching
“There is nothing in a caterpillar that tells you it’s going to be a butterfly.”

A Fuller View: Buckminster Fuller's Vision of Hope and Abundance for All

Philosopher, designer, architect, artist, engineer, entrepreneur, author, mathematician, teacher and inventor, Richard Buckminster Fuller was a renowned 20th century inventor and visionary born in Milton, Massachusetts on July 12, 1895. An enthusiastic educationist, he held a chair at Southern Illinois University (1959–75), and in 1962 became professor of poetry at Harvard. Dedicating his life to making the world work for all of humanity, Fuller operated as a practical philosopher who demonstrated his ideas as inventions that he called “artifacts.” Fuller worked as a ‘comprehensive anticipatory design scientist’ to solve global problems surrounding housing, shelter, transportation, education, energy, ecological destruction, and poverty.

Throughout the course of his life Fuller held 28 patents, authored 28 books, received 47 honorary degrees. And while his most well know artifact, the geodesic dome, has been produced over 300,000 times worldwide, Fuller’s true impact on the world today can be found in his continued influence upon generations of designers, architects, scientists and artists working to create a more sustainable planet.

Convinced that the way the world managed its human and material resources needed to be radically rethought, he applied himself to seeking long term, technology-led solutions to some of the most pressing problems of his time, particularly in the fields of building and transport. Despite the groundbreaking inventiveness of so much of his work, it was not until Fuller’s large-scale, multifunctional geodesic domes began to appear around the world in the 1950s that he really made his name.

During his life Fuller worked with and influenced such diverse talents as the architect Norman Foster, the sculptor and designer Isamu Noguchi and the composer John Cage. Since his death in 1983 the relevance of his radical discoveries, inventions and proposals has been accentuated with the realisation that the world’s resources are not infinite and must be handled with the greatest economy and care. Fuller is now cited as an inspiration by equally diverse figures from the industrial designer Marc Newson, to the humanitarian designers who put his ideas into practice in disaster zones all over the world in their work for Architecture for Humanity.

Buckminster Fuller: The Fuller World – The Sum Of Its Parts (Episode 2)

Buckminster Fuller – Everything I Know