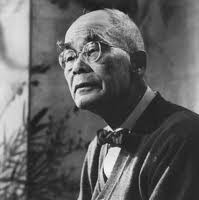 Example of Teaching
“The mind has first to be attuned to the Unconscious.”

An Introduction to Zen Buddhism

Suzuki, Daisetz Teitaro (dĪˈsĕts tātäˈrō sōzōˈkē), 1870–1966, Japanese Buddhist scholar, educated at Tokyo University who was a Japanese author of books and essays on Buddhism, Zen and Shin that were instrumental in spreading interest in both Zen and Shin (and Far Eastern philosophy in general) to the West. Suzuki was also a prolific translator of Chinese, Japanese, and Sanskrit literature. Suzuki spent several lengthy stretches teaching or lecturing at Western universities, and devoted many years to a professorship at Otani University, a Japanese Buddhist school.

After studying (1897–1909) in the United States, he became a lecturer at Tokyo University and he later taught at leading universities in Japan, Europe, and the United States. Besides living in the United States, Suzuki traveled through Europe before taking up a professorship back in Japan. Suzuki and his wife dedicated themselves to spreading an understanding of Mahayana Buddhism.

In his day, Suzuki was a leading authority on Buddhism and is known for his introduction of Zen Buddhism to the West. It was Suzuki’s contention that a Zen satori (awakening) was the goal of the tradition’s training, but that what distinguished the tradition as it developed through the centuries in China was a way of life radically different from that of Indian Buddhists.

D.T. Suzuki, the Swordsman & the Cat