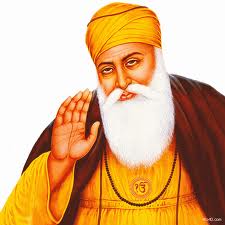 Example of Teaching
“God is one, but he has innumerable forms. He is the creator of all and He himself takes the human form.”

The First Sikh Spiritual Master: Timeless Wisdom from the Life and Techniques of Guru Nanak 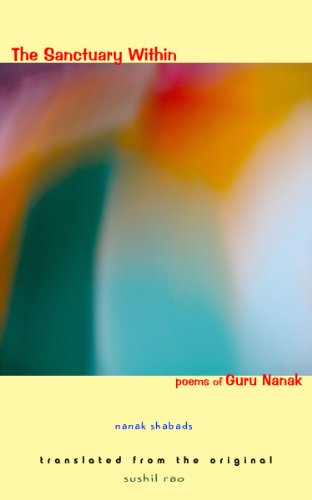 The Sanctuary Within : Poems of Guru Nanak

Nanak was the founder of Sikh religion and the first of Sikhism’s ten gurus. His teachings focused on the praise and appreciation of the Creator, the One Eternal God – “Waheguru.”
He fiercely opposed religious ritualism and preached equality of humans without any prejudice to race, caste and ethnicity. Nanak combined the elements of both the Moslem and Hindu traditions which gave birth to the Sikh philosophy. He aso invented the Gurumukhi script by simplifying the Sanskrit characters. The holy book, the Granth of the Sikhs is written in Gurumukhi.

Guru Nanak Dev’s three pillars of Sikhism were:
1.Naam Japna – meditation on God through reciting and chanting and to practice the path of Dharam (righteousness) .

2.Kirat Karni – earn an honorable living as householders, through your physical and mental effort while accepting both pains and pleasures as GOD’s gifts and blessings.

3.Vand Chakna –  the spirit of sharing and giving suggested that community or Sadh Sangat was an important part of Sikhism.

Nanak was born on 15 April 1469, celebrated as Prakash Divas of Guru Nanak Dev, at Rāi Bhoi Kī Talwaṇḍī, now called Nankana Sahib, near Lahore, Pakistan. Today, his birthplace is marked by Gurdwara Janam Asthan. Nanak was close to his older sister, Bibi Nanaki, who became a spiritual figure in her own right. As a married woman when she moved to Sultanpur, he followed her. Commentaries on his life give details of his blossoming awareness from a young age. At the age of five, Nanak is said to have voiced interest in divine subjects. At age seven, his father, Kalyan Chand Das Bedi enrolled him at the village school. Notable lore recounts that as a child Nanak astonished his teacher by describing the implicit symbolism of the first letter of the alphabet, which is an almost straight stroke in Persian or Arabic, resembling the mathematical version of one, as denoting the unity or oneness of God. Other childhood accounts refer to strange and miraculous events about Nanak witnessed by Rai Bular such as a poisonous cobra being seen to shield the sleeping Nanak’s head from the harsh sunlight.

Sikh tradition states that at around 1499, at the age of 30, Nanak had a vision. After he failed to return from his ablutions, his clothes were found on the bank of a local stream. The townspeople assumed he had drowned in the river. Nanak appeared after three days announcing, “There is neither Hindu nor Mussulman (Muslim) so whose path shall I follow? I shall follow God’s path. God is neither Hindu nor Mussulman and the path which I follow is God’s.” At this time seeing the world suffering of hatred and hypocrisy, Nanak set out on a mission for regeneration of humanity. With his companion Bhai Mardana, he  visited various centers of Hindus, Muslims, Buddhists, Jainis, Sufis, Yogis and Sidhas. The two traveled by foot and covered most of India and present day Bangladesh, Pakistan, Tibet, Nepal, Bhutan, South West China, Afghanistan, Iran, Iraq, Saudi Arabia, Egypt, Israel, Jordan, Syria, Kazakhstan, Turkmenistan, Uzbekistan, Tajikistan, and Kyrgyzstan.

The earliest biographical sources on Nanak’s life recognised today are the Janamsākhīs (life accounts) and the vārs (expounding verses) of the scribe Bhai Gurdas. The most popular Janamsākhī were allegedly written by Nanak’s close companion, Bhai Bala.

The Story of Guru Nanak’s Birth

Hollow Rituals Have No Value

The Story of Guru Nanak Jayanti

The Story Of Guru Nanak

The Life of Guru Nanak