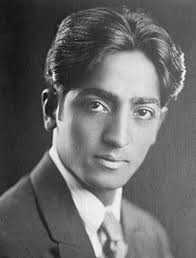 Example Teaching
“The moment you have in your heart this extraordinary thing called love and feel the depth, the delight, the ecstasy of it, you will discover that for you the world is transformed.”

Freedom from the Known 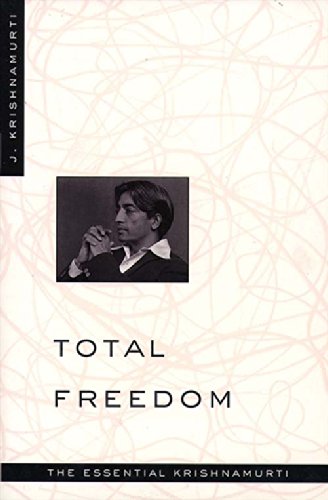 Think on These Things

Jiddu Krishnamurti was a writer and speaker who expressed on the philosophy of life and positive social change. He spoke not as a guru but as a friend, and his talks and discussions are based not on tradition-based knowledge but on his own insights into the human mind and his vision of the sacred. He is regarded globally as one of the greatest thinkers who belonged to no religious organization, sect or country. Religious scholars found that his words threw new light on traditional concepts. Krishnamurti took on the challenge of modern scientists and psychologists and went with them step by step, discussed their theories and sometimes enabled them to discern the limitations of those theories.

Krishnamurti was born on 11 May 1895 in Madanapalle, a small town in south India. A sensitive and sickly child, “vague and dreamy,” he was often taken to be mentally retarded, and was beaten regularly at school by his teachers and at home by his father. In memoirs written when he was eighteen years old, Krishnamurti described psychic experiences, such as “seeing” his sister, who had died in 1904, and his mother, who had died in 1905. During his childhood he developed a bond with nature that was to stay with him for the rest of his life.

He and his brother Nitya were adopted in their youth by Dr Annie Besant, then president of the Theosophical Society. Dr Besant and others proclaimed that Krishnamurti was to be a world teacher, a Messiah whose coming the Theosophists had predicted. To prepare the world for this coming, a world-wide organization called the Order of the Star in the East was formed and the young Krishnamurti was made its head. In 1929, however, Krishnamurti renounced the role that he was expected to play, dissolved the Order with its huge following, and returned all the money and property that had been donated for this work.

In 1922 Krishnamurti moved to Ojai Valley, California with Nitya who was diagnosed with tuberculosis and the valley’s climate proved beneficial to his brother. Eventually a trust, formed by supporters, purchased a cottage and surrounding property in Ojai for them. This became Krishnamurti’s official residence, a place where he went through an intense, “life-changing” experience, variously characterized as a spiritual awakening, a psychological transformation, and a physical conditioning.  Ojai became a base for him where intellectuals and celebrities gathered to hear his annual talks in Oak Grove. Among those were Aldous Huxley and Dr. David Bohm, Jackson Pollack, Christopher Isherwood, Ann Morrow Lindbergh. Charlie Chaplin and Greta Garbo.

From his days in Ojai until his death on 17 February 1986, Krishnamurti travelled throughout the world talking to large audiences and to individuals about the need for a radical change in mankind.

I Don’t Believe In Anything – Interview With Krishnamurti

Jiddu Krishnamurti: 8 Wise Facts From The Guru Who Didn’t Believe In Gurus

Jiddu Krishnamurti on The First and Last Freedom

Exploring the Structure of Desire

The Problem of Fear

You Are The World

Why Does The Mind Constantly Seek Pleasure?