by the Sikh Missionary Society: (Guru) Nanak Dev was a successful shopkeeper in his village, Talwandi.  Because of his honesty and integrity, he was appointed manager of the government stores at Sultanpur Lodhi, in Punjab, on the banks of the river Bayeen.  This was a job of great responsibility as large stores and stocks were involved in government dealings.  One could easily misappropriate lots of money or stores.  Junior officials were usually not very sincere. On the contrary, they were quite often dishonest. 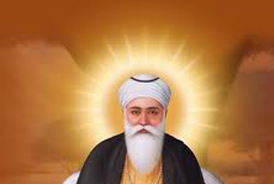 All residents of the town were satisfied with the good dealings of (Guru) Nanak Dev.  The employees, however, did not like any strict control over them.  They were always on the lookout for an excuse to complain against him.  (Guru) Nanak often gave a lot of money and food to the needy people.  Whenever any person needed support, (Guru) Nanak was always ready to help him.  The corrupt employees did not like the honest conduct of Nanak.  Tired of him, they alleged that Nanak was giving away government stocks to make a good name for himself.  The people knew about the greatness of Nanak and, therefore, refused to believe these rumors.

Finally, the employees lodged a complaint with the Nawab that (Guru) Nanak Dev was misappropriating stores and stocks.  Continued complaints regarding mishandling of the stores forced the Nawab to check the accounts, and stores.  To the great embarrassment of the Nawab, everything was in order.  There was no shortage at all, as doubted by the authorities.  Most employees, who themselves were corrupt and had complained to defame (Guru) Nanak, felt very ashamed.

Even after this incident, the employees did not mend their ways.  They kept spreading rumors against the “Guru.”  They became even more jealous because of his rising popularity.  Therefore, after some time, they again raised the same issue and started telling people that (Guru) Nanak was not keeping the accounts properly.  The second inspection of stores proved once more that all complaints by the employees were false and malicious.  The evil intentions of the employees became known to everyone.  All the residents of the village appreciated the honest living of (Guru) Nanak and the sharing of his earnings with other people.  Even the Nawab of the town respected him as a holy man.

After demonstrating the principles of truthful living, he decided to deliver this message to the people of the world.  To achieve his mission, he made plans to go on long tours.  (Guru) Nanak Dev resigned his job even though the Nawab repeatedly requested him to stay there.

A Sikh earns his living honestly. Dishonest earnings are unpious, hence are prohibited to a Sikh in the same way as eating of beef is prohibited to a Hindu and pork to a Muslim.