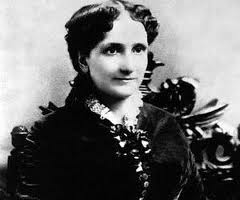 Example of Teaching
“Happiness is spiritual, born of truth and love. It is unselfish; therefore it cannot exist alone, but requires all mankind to share it.”

Science and Health with Key to the Scriptures

Mary Baker Eddy overcame the obstacles of her time to found Christian Science, a religion which is practiced throughout the world today.  In an era when women were treated as second class citizens, Mary Baker Eddy broke through social and financial barriers, never retreating from her convictions and her faith in the Bible.

Mary Baker Eddy was born in 1821, the youngest of six children.  Her parents, Mark and Abigail Baker, farmed in Bow, New Hampshire.  Throughout her childhood, Mary often missed school because of illness.  As an adolescent, she refuted the Calvinist doctrine ofpredestination taught in their Congregational home, seeking guidance from the Bible.
In 1875 she published her definitive text, Science and Health with Key to the Scriptures. Mary Baker Eddy’s repeated attempts to get established churches to accept her concepts of healing met only with rejection.  Finally, in 1879, frustrated and disappointed, she formed her own church in Boston, Massachusetts:  the Church of Christ, Scientist.

Above all, Mary Baker Eddy was a prolific writer.  In addition to Science and Health, she also published a 100-page Church Manual, which is used to this day as a guide in establishing and operating Christian Science churches.  She wrote countless tracts, essays, and pamphlets, which are released through the Christian Science Publishing Company.The most famous of her publications, The Christian Science Monitor, first came out when Eddy was 87 years old.  Since that time, the newspaper has collected seven Pulitzer Prizes.

Today, the religion she founded has more than 1,700 churches and branches in 80 countries.

A Story About The Teaching of Mary Baker Eddy