by B.F. Skinner: Improving education seldom takes  the form of  improving teaching.  It is no doubt important  to find better teachers, build more and  better schools, teach less of  what is  not needed, bring  what must be  taught up  to date, and reach more students through various forms of mass media. 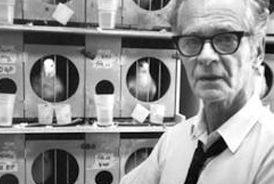 But by 1984, we should hope, teaching itself will also have been improved. The experimental analysis of behaviour, human and animal, has uncovered facts about learning and teaching which were not available when current methods were devised and which should make  it possible  to improve education in the plain sense of teaching more  in  the same  time with the same effort,  As  a result more  students should be  taught, and each should be  taught more and  taught it more thoroughly.

Each student should have a greater choice of programmes and should be able  to pursue any one of  them more successfully. Some gain in  this direction will come from a further abandonment of coercive techniques. The cane has in  most quarters been discarded,  but teachers still use less obvious forms of punishment, and-whether we like  to admit  it or  not most students still study mainly  to avoid  the consequences of not studying, Even  at the university level,  the commonest pattern is “assign and  test”, in which  the student is held responsible for learning simply in the sense  that he will suffer certain unhappy consequences if he fails. In  this system  it IS never the teacher who fails nor can it be, for “assigning and testing” is not really teaching at all.

It is not enough, however, simply  to abandon coercive practices. The methods of Summerhill are therapeutic rather than educational, Nor will it suffice  to replace punitive methods by “enriching” our schools  with real life or by turnlng from textbooks to non-verbal audio-visual media, There IS  good  reason to make  what is  to be learned as  aRractive as  possible, but in doing so we often deprive  the student of  the chance to  .discover that something is interesting when looked into. Brightly  coloured illustrations in a reading primer may attract the pupil  to the text they accompany,  but they entertain the  pupi bejore he  reads; a page of  black-andwhite text offers  him a much greater  opportunity to enjoy the  consequences  of reading. The audio-visual aids of 1984 will be  less  concerned with  attracting and holding attention.

The consequences of behaviour are particularly  emphaslsed in the study of what is technically called “operant  condltloning”, Behaviour reinforced by  its consequences is  not to be confused with  the conditioned reflexes of Pavlov, and only certain instances of operant reinforcement  are  appropriately called rewards. What is important here is  the extraordinary power-fully demonstrated  both in  the laboratory and in  field applications-to change behaviour  in specified ways through properly arranged reinforcements. Students  are only slightly affected by  what they get out of their education In the long run. It is the immediate consequences of their behaviour which  must  be carefully examined and altered.

The conspicuous signs of  the new technology of teaching in  1984  will probably be  the “teaching machines” used  to arrange the necessary contingencies of reinforcement.  It will be easy  to confuse the technology with the equipment. But machines are inevitable. Only  with the help of appropriate capital equipment can teachers cope with the problems  irnposed on  them by the extraordinary cultural changes and the growth in populations characteristic of the twentieth century. Although  the word “machine” suggests regimentation, such devices are designed precisely to help the  individual student. Students were once taught one at a time, and the ideal of  individualised instruction is still preserved in statements of educational policy, but the practice has long since succumbed to  the exigencies of teaching large classes.

Groups of  students move forward  at a standard pace.  Those who could move quickly are held back and grow bored; those who work slowly are pulled forward beyond their speed, finding their work  more and  more difficult, until  they eventually give up. But speed of learning, like speed of reading,  has no very important relation to the ultimate quality of  the student’s work. The system has often been  criticised, but an effective  attack upon  it has  at last come from the effort to arrange  the contingencies of reinforcement recommended  by an experimental analysis. By 1984 the fast worker  will perhaps be permitted  to .enjoy his natural advantage, while the slow student will be able to demonstrate that he is capable of comparable achievements given enough time.

Another result of applying recent discoveries  concerning learning and teaching has been a reconsideration of the  “[et-.minal behaviours” which compose the goals of  education Just what changes in  the student is the teacher  to  bring about? Current specifications are surprisingly vague. A related result has been the construction of sequences of  respouses leading  to the terminal behaviours thus specified, as the student moves from ignorance to competence, Such  sequences  are now commonly called programmed  instruction, The Principle is  not yet well understood, and  poorly designed programmes flood the  market, hut by 1984  the market  place should have had its well-known effect. Excellent  programmes-better than any now available  if the art and  science of programming continue to improve-should be available in  a wide range of subjects.

Many of  the subjects may be  unrecognisable, however.  It has often been remarked than an educated man has probably forgotten  most of the facts he acquired in school and  university. Education is what survives when what has been learned has  been forgotten. We teach “subjects” partly because teachers are hired as subject-matter specialists and partly because competence in a given subject is convenient proof of successful teaching.  But we may eventually learn how  to teach  the things which comprise the important marks of  an education. The specific intellectual skills, abilities, attitudes, and  tastes which are now taught mainly as by-products of content instruction may, if the experimental analysis of  behaviour is fully exploited, occupy the focus of  attention in 1984.

There will be teachers in 1984. They will not be, as they now are,  doing things which can be done by machines, but with the help of machines they will be teaching  effectively, Because  they will have more to offer society, both their morale and their economic status will be improved, They will have  the satisfaction of knowing that they are important as people.