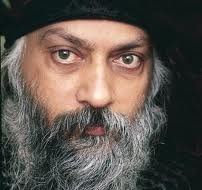 Example of Teaching
“Love can never possess. Love is giving freedom to the other. Love is an unconditional gift, it is not a bargain.”

Courage: The Joy of Living Dangerously

The Book of Secrets: 112 Meditations to Discover the Mystery Within

Born on December 11, 1931 in  the village of Kuchwada in India’s Madhya Pradesh district, Chandra Mohan Jain  was also known as Acharya Rajneesh. During the 1970s and 80s, the mystic guru was called Bhagwan Shree Rajneesh and as Osho during the last two years of his life. His ashram  in Pune, India is known as the Osho International Meditation Resort. His teachings have had a notable impact on Western Nee Age and emphasise the importance of meditation, awareness, love, celebration, courage, creativity and humour—qualities that he viewed as being suppressed by adherence to static belief systems, religious tradition and socialisation.

According to Osho, every human being is a Buddha with the capacity for enlightenment, capable of unconditional love and of responding rather than reacting to life. He presented meditation not just as a practice but as a state of awareness to be maintained in every moment, a total awareness that awakens the individual from the sleep of mechanical responses conditioned by beliefs and expectations. He employed Western psychotherapy in the preparatory stages of meditation to create awareness of mental and emotional patterns.

Osho was a philosophy lecturer at the Jabalpur University and as a public speaker, he was outspoken and controversial on his criticism of socialism and institutionalised religions. He also advocated a more open attitude towards sexuality: a stance that earned him the sobriquet “sex guru” in the Indian and later international press. In 1970, Osho settled for a while in Bombay. He began initiating disciples (known as neo-sannyasins) and took on the role of a spiritual teacher. He moved to Pune in 1974, and established an ashram that attracted increasing numbers of Westerners. The ashram offered therapies derived from the Human Potential Movement to its Western audience and made news in India and abroad, chiefly because of its permissive climate and Osho’s provocative lectures. By the end of the 1970s, there were mounting tensions with the Indian government and the surrounding society.

In 1981, Osho relocated to the United States and his followers established an intentional community, later known as Rajneeshpuram, in the state of Oregon. Within a year, the leadership of the commune became embroiled in a conflict with local residents, primarily over land use, which was marked by hostility on both sides.  The Oregon commune collapsed in 1985 when Osho revealed that the commune leadership had committed a number of serious crimes, including a bioterror attack (food contamination) on the local citizens. He was arrested shortly afterwards and charged with immigration violations. Osho was deported from the United States in accordance with a plea bargain. Twenty-one countries denied him entry, causing Osho to travel the world before returning to Pune, where he died in 1990.

Osho’s teachings, delivered through his discourses, were not presented in an academic setting, but interspersed with jokes and delivered with a rhetoric that many found spellbinding. He spoke on major spiritual traditions including Jainism, Hinduism, Hassidism, Tantrism, Taoism, Christianity, Buddhism, on a variety of Eastern and Western mystics and on sacred scriptures such as the Upanishads and the Guru Granth Sahib. Osho also drew on a wide range of Western ideas. His view of the unity of opposites recalls Heraclitus, while his description of man as a machine, condemned to the helpless acting out of unconscious, neurotic patterns, has much in common with Freud and Gurdjieff. His vision of the “new man” transcending constraints of convention is reminiscent of Nietzsche’s Beyond Good and Evil; his views on sexual liberation bear comparison to D. H. Lawrence; and his “dynamic” meditations owe a debt to Wilhelm Reich.

Spiritual Guru Explains The Truth About The Women’s Liberation Movement

Osho: Let Sex Be A Playfulness

Waking Up The World

With Meditation Life Will Be a Sheer Joy

Dreams Are Your Unlived Life