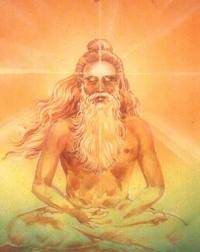 Example of Teaching
“For those who have an intense urge for Spirit and wisdom, it sits
near them, waiting.”

The Yoga Sutras of Patañjali: A New Edition, Translation, and Commentary

Light on the Yoga Sutras of Patanjali

How to Know God: The Yoga Aphorisms of Patanjali

Sage Patañjali was a great expounder of yoga. He penned the ancient Indian heritage through his treatise, the Yoga Sutras of Patañjali – the 196 sutras (aphorisms) that constitute the foundational text of Raja yoga. The exact date of the compilation the sutras is not known, However its is believed to be written around 200 B.C.

Patañjali’s place of birth is held to be “Gonarda”, in India, and he described himself as a “Gonardiya” throughout his life.  In one popular legend, Patañjali was born to Atri and his wife Anasuya (this would make him go back to the time of the creation by Brahma). According to this tradition, Anasuya had to go through a stern test of her chastity when the Trimurti themselves came as Bhikshuks and asked her for Bhiksha (begging for alms). She passed their test by accepting them as her children and fed them. She got the boon where all the three Murtis will be born to them. They were Soma Skandan or Patañjali, Dattatreya, and Durvasa.

At the heart of Patañjali’s teachings is the eight-fold path of yoga  (the sum of which constitute Ashtanga Yoga). The sutras form the theoretical and philosophical basis of Raja Yoga, and are considered to be the most organized and complete definition of that discipline. The Sutras not only provide yoga with a thorough and consistent philosophical basis, they also clarify many important esoteric concepts which are common to all traditions of Indian thought, such as karma.

The eight limbs of Patañjali’s yoga are:

1. Yama – refers to the five abstentions: non-violence, truth,  non-covetousness, abstinence, and non-possessiveness.
2. Niyama refers to the five observances: cleanliness of body and mind, satisfaction, austerity, study of the Vedic scripture and surrender to (or worship of) God.
3. Asana: discipline of the body
4. Pranayama: control of breath.
5. Pratyahara: withdrawal of senses from their external objects.
6. Dharana: concentration on a physical object, such as a flame or image of a deity.
7. Dhyana: meditation.
8. Samadhi: oneness with the object of meditation.

Patanjali and His Eightfold Path of Yoga