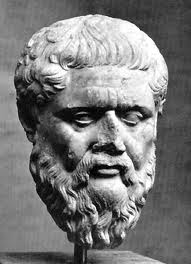 Example of Teaching
“One of the penalties for refusing to participate in politics is that you end up being governed by your inferiors.”

The Trial and Death of Socrates

Plato (427 BC – 347 BC) was an immensely influential classical Greek philosopher, student of Socrates, teacher of Aristotle, writer, and founder of the Academy, one of the earliest known organized schools, in Western civilization in Athens.  Plato’s own real name was “Aristocles” however his nickname, Plato, originated from wrestling circles. Since Plato means “broad,” it probably refers either to his physical appearance or wrestling style.

Plato became a pupil of Socrates in his youth, and unlike Socrates, Plato wrote down his philosophical views and left a considerable number of manuscripts. He was deeply affected by the city’s treatment of Socrates and much of his early work records his memories of his teacher. It is suggested that much of his ethical writing is in pursuit of a society where similar injustices could not occur.

Plato, a philodorian, lectured extensively at the Academy but he also wrote on many philosophical issues. The personage of Socrates often makes an appearance in the dialogues of Plato though it is unclear how much of the content and argument of any given dialogue is Socrates’ point of view, and how much of it Plato’s. In Plato’s writings one finds debates concerning aristocratic and democratic forms of government. One finds debates concerning the role of heredity and environment in human intelligence and personality long before the modern “nature versus nurture” debate began.  One of Plato’s legacies, and perhaps his greatest, was his dualistic metaphysics, often called Platonism or Realism.

His presence survives through his written philosophical/dramatic compositions which are preserved in manuscripts recovered and edited in many different editions and translations since the birth of the Humanist movement. The written corpus of Plato consists almost entirely of dialogues, epigrams and letters.

Introduction and Analysis of Plato Laws

Plato’s Wisdom On How To Live A Good Life

30 of The Most Profound Quotes From Plato

The Symposium by Plato