He was the embodiment of pure intellect, the bumbling professor with the German accent, a comic cliche in a thousand films. 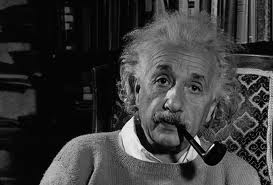 Instantly recognizable, like Charlie Chaplin’s Little Tramp, Albert Einstein’s shaggy-haired visage was as familiar to ordinary people as to the matrons who fluttered about him in salons from Berlin to Hollywood. Yet he was unfathomably profound — the genius among geniuses who discovered, merely by thinking about it, that the universe was not as it seemed.

Even now scientists marvel at the daring of general relativity (“I still can’t see how he thought of it,” said the late Richard Feynman, no slouch himself). But the great physicist was also engagingly simple, trading ties and socks for mothy sweaters and sweatshirts. He tossed off pithy aphorisms (“Science is a wonderful thing if one does not have to earn one’s living at it”) and playful doggerel as easily as equations. Viewing the hoopla over him with humorous detachment, he variously referred to himself as the Jewish saint or artist’s model. He was a cartoonist’s dream come true.

(See 20 things you need to know about Albert Einstein.)

Much to his surprise, his ideas, like Darwin’s, reverberated beyond science, influencing modern culture from painting to poetry. At first even many scientists didn’t really grasp relativity, prompting Arthur Eddington’s celebrated wisecrack (asked if it was true that only three people understood relativity, the witty British astrophysicist paused, then said, “I am trying to think who the third person is”). To the world at large, relativity seemed to pull the rug out from under perceived reality. And for many advanced thinkers of the 1920s, from Dadaists to Cubists to Freudians, that was a fitting credo, reflecting what science historian David Cassidy calls “the incomprehensiveness of the contemporary scene–the fall of monarchies, the upheaval of the social order, indeed, all the turbulence of the 20th century.”

Einstein’s galvanizing effect on the popular imagination continued throughout his life, and after it. Fearful his grave would become a magnet for curiosity seekers, Einstein’s executors secretly scattered his ashes. But they were defeated at least in part by a pathologist who carried off his brain in hopes of learning the secrets of his genius. Only recently Canadian researchers, probing those pickled remains, found that he had an unusually large inferior parietal lobe — a center of mathematical thought and spatial imagery — and shorter connections between the frontal and temporal lobes. More definitive insights, though, are emerging from old Einstein letters and papers. These are finally coming to light after years of resistance by executors eager to shield the great relativist’s image.

Unlike the avuncular caricature of his later years who left his hair unshorn, helped little girls with their math homework and was a soft touch for almost any worthy cause, Einstein is emerging from these documents as a man whose unsettled private life contrasts sharply with his serene contemplation of the universe. He could be alternately warmhearted and cold; a doting father, yet aloof; an understanding, if difficult, mate, but also an egregious flirt. “Deeply and passionately [concerned] with the fate of every stranger,” wrote his friend and biographer Philipp Frank, he “immediately withdrew into his shell” when relations became intimate.

Einstein himself resisted all efforts to explore his psyche, rejecting, for example, a Freudian analyst’s offer to put him on the couch. But curiosity about him continues, as evidenced by the unrelenting tide of Einstein books Amazon.com lists some 100 in print).

The pudgy first child of a bourgeois Jewish couple from southern Germany, he was strongly influenced by his domineering, musically inclined mother, who encouraged his passion for the violin and such classical composers as Bach, Mozart and Schubert. In his preteens he had a brief, intense religious experience, going so far as to chide his assimilated family for eating pork. But this fervor burned itself out, replaced, after he began exploring introductory science texts and his “holy” little geometry book, by a lifelong suspicion of all authority.

His easygoing engineer father, an unsuccessful entrepreneur in the emerging electrochemical industry, had less influence, though it was he who gave Einstein the celebrated toy compass that inspired his first “thought experiment”: what, the five-year-old wondered, made the needle always point north?

At age 15, Einstein staged his first great rebellion. Left behind in Munich when his family relocated to northern Italy after another of his father’s business failures, he quit his prep school because of its militaristic bent, renounced his German citizenship and eventually entered the famed Zurich Polytechnic, Switzerland’s M.I.T. There he fell in love with a classmate, a Serbian physics student named Mileva Maric. Afflicted with a limp and three years his senior, she was nonetheless a soul mate. He rhapsodized about physics and music with her, called her his Dolly and fathered her illegitimate child–a sickly girl who may have died in infancy or been given up for adoption. They married despite his mother’s objections, but the union would not last.

A handsome, irrepressible romantic in those years, he once had to apologize to the husband of an old flame after Mileva discovered Einstein’s renewed correspondence with her. He later complained that Mileva’s pathological jealousy was typical of women of such “uncommon ugliness.” Perhaps remorseful about the lost child and distanced by his absorption with his work — his only real passion — and his growing fame, Mileva became increasingly unhappy. On the eve of World War I, she reluctantly accompanied Einstein to Berlin, the citadel of European physics, but found the atmosphere insufferable and soon returned to Zurich with their two sons.

By 1919, after three years of long-distance wrangling, they divorced. He agreed to give her the money from the Nobel Prize he felt sure he would win. Still, they continued to have contact, mostly having to do with their sons. The elder, Hans Albert, would become a distinguished professor of hydraulics at the University of California, Berkeley (and, like his father, a passionate sailor). The younger, Eduard, gifted in music and literature, would die in a Swiss psychiatric hospital. Mileva helped support herself by tutoring in mathematics and physics. Despite speculation about her possible unacknowledged contributions to special relativity, she herself never made such claims.

Einstein, meanwhile, had taken up with a divorced cousin, Elsa, who jovially cooked and cared for him during the emotionally draining months when he made the intellectual leaps that finally resulted in general relativity. Unlike Mileva, she gave him personal space, and not just for science. As he became more widely known, ladies swarmed around him like moonlets circling a planet. These dalliances irritated Elsa, who eventually became his wife, but as she told a friend, a genius of her husband’s kind could never be irreproachable in every respect.

Cavalier as he may have been about his wives, he had a deep moral sense. At the height of World War I, he risked the Kaiser’s wrath by signing an antiwar petition, one of only four scientists in Germany to do so. Yet, paradoxically, he helped develop a gyrocompass for U-boats. During the troubled 1920s, when Jews were being singled out by Hitler’s rising Nazi Party as the cause of Germany’s defeat and economic woes, Einstein and his “Jewish physics” were a favorite target. Nazis, however, weren’t his only foes. For Stalinists, relativity represented rampant capitalist individualism; for some churchmen, it meant ungodly atheism, even though Einstein, who had an impersonal Spinozan view of God, often spoke about trying to understand how the Lord (der Alte, or the Old Man) shaped the universe.

In response to Germany’s growing anti-Semitism, he became a passionate Zionist, yet he also expressed concern about the rights of Arabs in any Jewish state. Forced to quit Germany when the Nazis came to power, Einstein accepted an appointment at the new Institute for Advanced Study in Princeton, N.J., a scholarly retreat largely created around him. (Asked what he thought he should be paid, Einstein, a financial innocent, suggested $3,000 a year. The hardheaded Elsa got that upped to $16,000.) Though occupied with his lonely struggle to unify gravity and electromagnetism in a single mathematical framework, he watched Germany’s saber rattling with alarm. Despite his earlier pacifism, he spoke in favor of military action against Hitler. Without fanfare, he helped scores of Jewish refugees get into an unwelcoming U.S., including a young photographer named Philippe Halsman, who would take the most famous picture of him (reproduced on the cover of this issue).

Alerted by the emigre Hungarian scientist Leo Szilard to the possibility that the Germans might build an atom bomb, he wrote F.D.R. of the danger, even though he knew little about recent developments in nuclear physics. When Szilard told Einstein about chain reactions, he was astonished: “I never thought about that at all,” he said. Later, when he learned of the destruction of Hiroshima and Nagasaki, he uttered a pained sigh.

Following World War II, Einstein became even more outspoken. Besides campaigning for a ban on nuclear weaponry, he denounced McCarthyism and pleaded for an end to bigotry and racism. Coming as they did at the height of the cold war, the haloed professor’s pronouncements seemed well meaning if naive; Life magazine listed Einstein as one of this country’s 50 prominent “dupes and fellow travelers.” Says Cassidy: “He had a straight moral sense that others could not always see, even other moral people.” Harvard physicist and historian Gerald Holton adds, “If Einstein’s ideas are really naive, the world is really in pretty bad shape.” Rather it seems to him that Einstein’s humane and democratic instincts are “an ideal political model for the 21st century,” embodying the very best of this century as well as our highest hopes for the next. What more could we ask of a man to personify the past 100 years?