by Edward Hoffman: More than any other eastern thinker in the 20th century, Suzuki Catalyzed the rise of humanistic psychology, which has surpassed today’s interest in spirituality and well-being 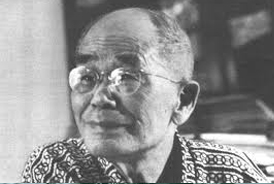 Despite the gloomy global economy, the field of positive psychology is booming. Often described simplistically by journalists as “the science of happiness,” it’s actually a broad focus on our strengths and talents, virtues and peak experiences in daily living. The name for this specialty originated with Martin Seligman at the University of Pennsylvania a dozen years ago. With amazing speed, it has spawned courses at hundreds of colleges, best-selling books, websites and workshops on topics like mindfulness, and wide-ranging research on the links between mood and wellness.

Yet, amid this flurry of excitement, it’s shameful that so little credit is given to a key figure who helped shift the focus away from Sigmund Freud’s gloomy fixations to a more optimistic view of human nature: Daisetz Teitaro Suzuki. More than any other Eastern thinker in the 20th century, he catalyzed the rise of humanistic psychology in the post-World War II era — and, indirectly, today’s mounting interest in spirituality and inner well-being. As 2011 marks the 55th anniversary of Suzuki’s death, the time is right to remember the remarkable man born in what’s now Kanazawa, western Japan.

Suzuki was descended from a long line of physicians of the samurai class. He was expected to follow in their path, but when he was only 6, his father died and this goal became financially impossible. Academically gifted, he taught English in several small towns before initiating higher education at Tokyo Senmon Gakko (the predecessor of Waseda University) and the nonregular course at the Imperial University in Tokyo. But by his early 20s, Suzuki felt drawn to spiritual matters, and became a novitiate at the Engakuji Rinzai Zen monastery in Kamakura.

What was his motivation? As Suzuki later reminisced, “My thoughts (had) started to turn to philosophy and religion, and as my family belonged to the Rinzai sect of Zen, it was natural that I should look to Zen for some of the answers to my problems (about losing my father and our family’s resulting poverty).”

At Engakuji, Suzuki’s mentor, the aged Roshi (Zen master) Imagita Kosen, bestowed the Buddhist name Daisetz, meaning “great humility” on his pupil. Suzuki spent long hours in zazen (sitting meditation) and immersed himself in classic Zen texts. He was especially inspired by the “Zenkan Sakushin” (Whips to Drive You Through the Zen Barrier), an anthology of writings on Zen discipline and advice compiled by a Chinese master of the Ming dynasty. Decades later, Suzuki would vividly describe these formative years in his spiritual memoir, “The Training of A Buddhist Monk.”

As he later reminisced, “In the way of moral effort, I used to spend many nights in a cave at the back of the Shariden building where the Buddha’s tooth was enshrined. But there was always a weakness of willpower in me, so that I often failed to sit up all night in the cave, finding some excuse to leave, such as the mosquitoes.”

Suzuki may have been exceptionally modest by temperament, but he was a brilliant linguist. Recognizing this talent was Roshi Kosen’s cosmopolitan successor — Shaku Soyen, who arranged for young Suzuki to work near Chicago as a professional translator of Eastern texts for the Open Court publishing firm. There for 12 years, Suzuki enthusiastically introduced Americans to classic Chinese, Japanese, Pali and Sanskrit writings — starting with Taoism’s seminal text, the “Tao Te Ching.” In 1907, Suzuki authored his first book, “Outlines of Mahayana Buddhism,” and thus began his subsequent, nearly 60-year career as a teacher and interpreter of Zen Buddhism to the West. During his stay in the U.S., he traveled widely including a visit to Europe — expanding his translation work and connecting with Theosophists and others interested in mystical teachings for the modern world.

Late in his life, Suzuki insisted that he had never planned to spend so much time residing in the U.S., but “one year grew into the next and I wound up staying in America for more than a decade. After that, I traveled around Europe for a year before returning to Japan.”

During this period, Suzuki also found time for romance. In 1911, he married Beatrice Erskine Lane, an American social worker eight years his junior drawn to Zen and Theosophy. By then, he was back in Japan as an English lecturer at the Imperial University, and they wedded in Yokohama. The two would adopt a son and collaborate on many literary projects until her death in 1939, for Lane was an accomplished scholar in her own right — whose lucid book on Mahayana Buddhism still remains in print after more than 70 years. Sharing her husband’s interest in psychology, she devoted an entire chapter in this work to the Buddhist concept of personality — and poetically declared that “The only definite teaching to be found in Zen is that . . . every man is a sleeping Buddha. Consequently, (one) has but to awaken his heart of wisdom by meditation to gain a direct insight into the nature of reality.”

The 1920s and 1930s marked Suzuki’s most productive years. Joining the faculty of Otani University in Kyoto, he taught both English and Buddhist philosophy, and received an honorary doctorate in literature. During this period, his major books included “An Introduction to Zen Buddhism,” “Essays in Zen Buddhism,” “The Training of the Zen Buddhist Monk,” his translation of the ancient Sanskrit Lankavatara Sutra, and especially “Zen and Its Influence on Japanese Culture.”

Fromm admired Suzuki’s Zen teaching that we grow spiritually in life not by mere words and intellect, but by involving our entire being. At the time, of course, Freudianism was the dominant approach in Europe and the U.S., and had nothing to say about such matters.

During the interwar years, Suzuki’s writings also helped modern Japanese to appreciate the impact of Zen thought on their own culture. For instance, in his preface to “The Training of the Zen Buddhist Monk,” Suzuki asserted that “It is impossible, as I maintain, in the study of the Orient, especially in the study of Japanese character and culture, to neglect — much less to ignore — the influence of Zen. “In Zen and Its Influence on Japanese Culture,” Suzuki described Zen’s impact on four different, long-standing traditions in his country: painting, literature, swordsmanship and the tea ceremony. Each of these domains is worth noting, though space constraint here necessarily make these brief.

Artistically, the Sumiye is a kind of sketch in black and white, involving ink composed of soot and glue, a brush of sheep’s or badger’s hair, and thin paper designed to absorb much ink. As Suzuki noted, such frail material was intentionally chosen to make sure that the artist’s inspiration was transferred onto it in the quickest possible time — allowing for no erasing, retouching or remodeling. In this way, observed Suzuki, “Sumiye attempts to catch spirit as it moves” — thereby embodying the Zen principle that in life, “Everything becomes, nothing is stationery.”

As for literature, the haiku is a special product of Japanese genius, according to Suzuki, developed in its highest form by the 17th-century Zen devotee Basho. How so? Because he freed haiku from mere wordplay and connected it to the experience of ultimate truth with such poems as “A frog jumps into the water. Hear the sound!”

As for swordsmanship, Suzuki contended that in feudal times, Japanese warriors were taught by Zen masters not to learn scholarly doctrines, but to develop a specific mental attitude: fearlessness before their possible death in battle. The 16th-century Zen master Takuan also taught his disciple Yagyu Tajima no Kami (swordsmanship teacher to the shogun of his day): “What is most important in the art of swordplay is to acquire . . . ‘immovable wisdom.’ ‘Immovable’ does not mean to be stiff and heavy . . . It means the highest degree of motility with a center which remains immovable . . . You must leave your mind free to make its own countermovement without your interfering deliberation.”

Finally, Suzuki contended that the Japanese tea ceremony, so integral and favored part of its culture — and similar to other long-standing artistic activities as flower arranging — embodies the spirit of sabi by emphasizing such elements as simplicity, naturalness, refinement and “familiarity singularly tinged with aloofness and everyday commonness veiled exquisitely with the mist of transcendental inwardness.”

Such insights by Suzuki helped to awaken broad Japanese interest in Zen Buddhism, especially as his reputation grew in the West.

When World War II erupted, Suzuki was under the suspicion of the Japanese government for his opposition to militarism. In his numerous wartime essays on Zen, he kept quiet about political matters, but in private letters as well as public speeches, he made clear his antiwar stance. For example, the day after Pearl Harbor was bombed, the 71-year-old Suzuki plunged Otani University’s faculty meeting into uproar when he contended, “With this, Japan will be destroyed. What will destroy it is Shinto and the militarists.”

Such shocking words, of course, proved prophetic — and in 1949, he was made a member of the Japan Academy and decorated by the emperor with the Order of Culture.

The postwar era marked the heyday of American Freudianism and its humanistic offshoots — and Suzuki, teaching Zen Buddhism at Columbia University in the 1950s, was at the epicenter of creative psychological thought. Only months before Horney’s death in 1952, she accompanied Suzuki and colleagues on a tour of Japanese Zen monasteries and emphasized the importance of his notion of “whole-heartedness” as a vital feature of mental health. Fromm became close friends with Suzuki, and in 1957, sponsored him as a guest speaker for a conference on Zen and psychoanalysis held in Cuernavaca, Mexico. Several years later, the two coauthored an influential book on this topic; like many others, Fromm was greatly touched by Suzuki’s personal warmth and kindness.

Abraham Maslow, guru of motivational psychology, was another humanistic thinker inspired by Suzuki during these years. Maslow, who pioneered in studying what he called “peak experiences” — that is, sudden moments of joy and meaning — was excited by Suzuki’s concept of sono-mama or suchness, as an element of mystical awareness. Sponsoring Suzuki’s lectures at Brandeis University, Maslow also regarded Suzuki’s Zen teaching of muga, or total absorption, as vital for a psychology of well-being and growth.

It is an historical irony, though, that Suzuki had much less impact on Japanese psychology than on its humanistic development in the U.S. and Europe. Why so? Because during the postwar years, Japanese psychologists were eager to establish their field as a rigorous experimentalist science, akin to biology, and looked askance at philosophical or spiritual thinkers. As the Jungian scholar Dr. Shoji Muramoto of Kobe City University of Foreign Studies comments, “Unlike in the West, Suzuki’s relevance to modern psychology has hardly been appreciated in Japan outside of a few journal articles. Nevertheless, he was perhaps the first Zen philosopher to deal with Zen as an object of academic study in its philosophical basis and psychological aspects, as well as its history.”

After retiring from Columbia University in 1957, the elderly Suzuki returned to Japan, where he kept up an active, international schedule of writing, attending conferences, lecturing and receiving awards for his lifetime achievements.

Until his death in 1966 at age 95, he influenced a new generation interested in the relevance of Eastern thought — particularly Zen Buddhism — for contemporary civilization. For instance, his writings on Zen meditation later contributed to mindfulness training for health care professionals as a valued therapeutic tool — and now sponsored by dozens of medical schools in the U.S. and elsewhere.

As Suzuki astutely saw, the world was hungry for Eastern spiritual wisdom. His final words? “Don’t worry. Thank you! Thank you!”