FRISCO — Mata Amritanandamayi has been called a spiritual leader, a humanitarian and a saint.  She’s also one heck of a hugger. 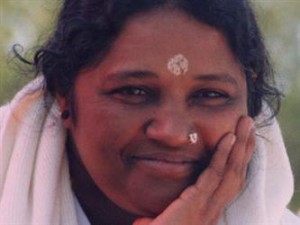 The India native, known as Amma, or Mother, has hugged more than 30 million people worldwide as a blessing.

On Wednesday and Thursday, as part of a national tour, the so-called Hugging Saint was at the Frisco Conference Center, where thousands showed up for a hug-a-thon.
Many brought gifts of flowers and fruit for Amma, who first offered spontaneous embraces as a child to provide comfort to needy people. Through her humanitarian work, she provides medical care, builds homes and runs orphanages.
When Amma’s hugging, she doesn’t stop to eat or use the bathroom. She’ll hug through the night if that’s what it takes.
Why all the hugging?
“If you ask why do you hug, it’s like asking a river why do you flow?” Amma said through a translator. “It’s my nature to give love to everyone. … The purpose is to awaken motherhood, the inner feelings of motherhood.”
By awakening love and compassion, she believes the world will be more harmonious.
Mildred Banks of Tulsa, Okla., said her hug from Amma was heavenly.
“You’re feeling yourself imbued with her love,” she said. “She transfers it right through her to you. … We are so separated and divided in this country, and it’s very unloving. Amma teaches us to love one another.”
Amma sat in a chair adorned with white roses. Kneel in front of Amma and she offers a wide smile. Rest your head on her shoulder and she gently places her arms around you.
Amma’s hug is warmer and deeper than you’ve ever received. The hug lasts about a minute. It almost transforms you to a different place.
Then she leans in and whispers.
“My darling, darling, darling darling.”
Afterward, Amma hands out a Hershey’s kiss, a carnation petal and a red apple.
Shawn Sabanayagam of Grapevine said that even his mother’s hugs can’t match Amma’s.
“My mother’s hugs are normal human hugs,” he said. “Amma’s hugs feel different. The hugs are spiritual.”
Jill Wallace of Austin was in tears after getting her hug.
“She gives them just from her heart,” she said. “You feel that magical, divine kind of love.”
Amma’s embrace won’t change the way Wallace hugs others. Wallace is known for being a great hugger. She doesn’t keep her distance and pat you on the back. She offers close, strong embraces.
“When I hug people, I give it everything I have,” Wallace said. “Because I care.”