Dhammananda Bhikkhuni:  The decision to become a Buddhist nun is not taken lightly. First, mothers and other family members cut off long wisps of hair. 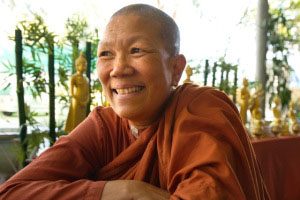 Next they chop it as short as the scissors will manage. And then come the razors. White clad ‘Mae Chi’ laywomen bow over the heads of the nuns-tobe, softly working from front to neck, from side to side and behind ears until there is nothing black left. They silently scrape eyebrows, dab off occasional drops of blood, wipe off soap from wet faces – and some tears, too.

‘The hair is the beauty of the woman. But now we let go of the beauty,’ says Venerable Dhammananda, the abbess of Wat Songdhammakalyani. Twenty three women are being temporarily ordained at the monastery in Nakhon Pathom, a one hour drive northwest of Bangkok. The shaving marks the beginning of the ceremony that turns students and housewives, professors and business women into Buddhist novices, ‘samaneris’.

The women immerse themselves into monastic life and study dhamma, the teachings of Buddha, for nine days during the annual summer course at Wat Songdhammakalyani. Afterwards they go back to their jobs, their families and their everyday life. Eventually their hair will grow long again. Some might continue on the spiritual path, some might not. A temporary ordination as a Buddhist monk has long been a Thai custom. The king has done it and the rice farmers’ sons do it, too. Government offices and large companies even grant their employees up to three months’ leave if they want to live in a monastery, with full salary. It is considered a part of the education, a way of self improvement: simply something good to do.

This is for men though. For women, the situation is much different: Buddhist nuns do not have any legal status in Thailand, where Theravada Buddhism is the national religion and subject to legislative powers, nor do they enjoy as much respect and recognition as monks. Many people even think ordained nuns, other than ‘mae chi’ that live at many Thai monasteries, do not exist at all.

The scenery at Wat Songdhammakalyani proves the contrary: About eighty nuns, baldheaded and dressed in saffron robes, are present during the ordination ceremony. They bless the novices and guide them through the rite.

According to Ven. Dhammananda there are currently over thirty fully ordained nuns, ‘bhikkhunis’, in Thailand, living in monasteries throughout the country. Just like Venerable Dhammananda herself eleven years ago, they were ordained in Sri Lanka, a country where the Theravada Buddhism is dominant as in Thailand, but Sri Lanka recognises nuns.

The Thai nuns, be they sameneris or bhikkhunis, temporary or permanent, might merely want to practise the dhamma. Through ordination they let go not only of hair and beauty but of all worldly ties, symbolised by coloured folded flowers with a coin wrapped inside that they throw on the steps of the vihara, the monastery hall. And so they enter a different world. But at the same time, each nun is part of a larger movement: Buddhist women have been fighting for years for equality and social acceptance in Thailand. ‘Our goal is to establish a female Sangha, that is, an order of nuns,’ says Ven. Dhammananda, the most senior figure of the movement. The sixty eight year old former university lecturer and activist known by the worldly name ‘Chatsumarn Kabilsingh’ became Thailand’s first Theravadin bhikkhuni. She follows in the footsteps of her mother, Ven. Ta Tao Fa Tzu alias ‘Voramai Kabilsingh’, who was Thailand’s first ordained bhikkhuni under the Mahayana tradition and entered monastic life in Taiwan in 1956. In 1960 she built Wat Songdhammakalyani. The day of the sameneri ordination is the founder’s birthday.

The nuns’ struggle for equality is quiet rather than loud, its force more persistent than smashing, its success slow but steady. There is a simple underlying logic: while the number and strength of ordained women is growing, Thai society needs to provide them more and more space. Ven. Dhammananda is convinced that it would be better for society if the government accepted a female Sangha. However she does not consider any legal fight the duty of nuns. In fact an amendment of Thai laws is the battlefield of legislators and nongovernmental organisations (NGOs). A female senator, Rabiebrat Pongpanit, proposed the recognition of female ordination as early as 2005. The current, revitalised campaign was launched with a public seminar at Parliament House in February this year. It is supported by senators, both male and female, as well as Buddhist monks and nuns, women rights’ activists and other members of the civil society.

‘Right now we are focusing on the draft of the Gender Equality Act that the cabinet just approved to admit to Parliament for consideration,’ says Sutada Mekrungruengkul, acting coordinator of the Women Networks Reshaping Thailand (WREST). ‘We think that this law will lead to the possibility of legalising female monks in the future.’ While the conservative, patriarchal laws might stay in place for some time, the community of Thailand’s spiritual women continues to grow. In December there will be another temporary ordination at Wat Songdhammakalyani and in February 2014 the first full ordination of nuns inside Thailand is scheduled. According to Theravada tradition, a bhikkhuni is to be ordained by a monk and a nun. Since Thai monks are not – yet? – allowed to ordain women and there is no senior nun entitled to do so either, this first ordination will be led by both nuns and monks from Sri Lanka. The following year Ven. Dhammananda will be able to lead the rite herself. The nuns are profoundly convinced that they are not doing anything against the law but that on the contrary they do what Buddha has foreseen for them. And so after the ceremony at Wat Songdhammakalyani the freshly ordained samaneris contentedly leave the temple hall in single file, clad in their new saffron robes. Then they receive the first alms into their bowls, generously given by the crowd of family and friends, onlookers and devoted Buddhists who obviously have no objections whatsoever to women entering this religious male bastion.