In the Name of Love

By Gloria Karpinski:  Mother Meera:  They come to us and endure the pain inherent in being in this dimension for one reason only – love of us. 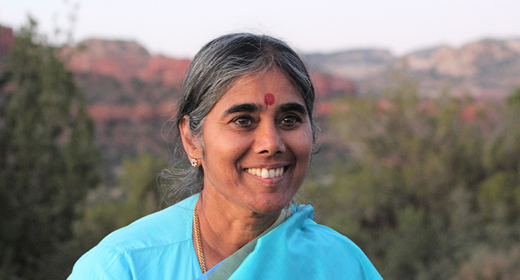 It is a sacrifice for love that, of course, none of us can fully comprehend, but in the recognition of the unqualified pureness of that love, I have learned more about Jesus, Krishna, Kwan Yin, Mary, Meera, and the others who have blessed our planet than all of the books and speculations that have passed through my mind put together. Through Mother Meera, for example, I have deepened my understanding of Jesus. A meditation on this divine love fills me with gratitude, humility, and awe so deep I can find no expression in the universe big enough to hold it.

There is the place within us, male and female, that is beyond polarity, that is whole in its essence. We incarnate into one gender or the other to satisfy our karma and the creative laws of the physical. Spiritual disciplines from all over the world are guideposts for returning to the state of wholeness that is truly androgynous in the pure sense of that word. We have deep wounds from our forgetfulness of that wholeness.
Our myths express the externalization of this holy yin/yang dance through story, giving insight into very complicated psychological processes and describing the inner landscape. Myths, religions and spiritual symbols, rituals – they all form the language of the unconscious for us to see. Before we fully choose for ourselves, our powerful myths tell us what is right and wrong, what will be rewarded and punished. Basically, we learn what is going to be acceptable in our society.

THE SACRED ASPECTS OF MOTHER

It’s likely that in growing up you didn’t have an Isis or a figure such as the beloved Tara of Tibet, a highly evolved princess who became bodhisattva, one who has mastered but stays to help others. Where were the reflections of the multifaceted aspects of the mother such as the East offers – the elegant Saravati, creator of languages, author of sciences and mathematics, queen of knowledge as well as wisdom. Or the Earth Mother Kali, destroyer of time. Or White Buffalo Woman, who brought the peace pipe to the American Indians. Where were the temples of the divine feminine, the rituals, the images, the sacred scriptures of the various queens of heaven, the words of a feminine deity to inspire and instruct?

I can track my own relationship to Mother Meera back to my childhood questions. By 11 years old, I was puzzled about the absence of a female deity in my culture. I was raised in a Protestant church in a midsized Southern town. Mary, mother of Jesus, was not even a relevant figure in that setting. She was brought out as a part of a larger drama once a year at Christmas, but that was it. I quickly got the message that the very mention of a goddess was strangely dangerous. But I didn’t have the scholarship to challenge the system at that point. So I simulated and acceptance, which is what most of us did.

We have denied the Mother for so long. The world has done a major repression over the past 3500 years of the truths of the feminine. For a great majority of Western people, it is still questionable to even speak of a Divine Mother. For many it is quite scary, almost sinful, as if to say there is a Cosmic Father who is going to punish us if we mess around with loyalty to Him. That sounds foolish, I know, but in the privacy of your heart and meditations, ask yourself how comfortable you are with saying “God-She” and not be making a joke: Or to capitalize the Goddess and really mean it – to feel easy with it and not defensive and angry. We all long for wholeness. And we are not whole when we only honor half of our divine nature.