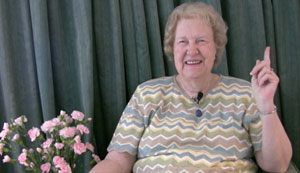 Communications Director, Ozark Mountain Publishing, about Dolores’ Quantum Healing TechniqueTM(QHHT), which she has pioneered over her career spanning over 40 years.
Stephanie is also a QHHT Practitioner trained by Dolores.

Stephanie: Dolores, you’ve been practicing this yourQuantum Healing Technique for many years now.  How did you get started?

Dolores: It seems strange to me to look back over my work in regressive hypnosis therapy and see how, not only myself, but the entire field has evolved and changed.  When I was thrown (ever so gently) into the field of reincarnation in 1968 it was all new and challenging.  I had opened a door that would never be closed again in my mind.  There were no books or instructions in those days to guide a therapist, so I have had to write my own rules and develop my own technique from the beginning.  I now know that was for the better.  I never had anyone telling me there was only one correct method (theirs) to do hypnosis.  I never had anyone telling me you couldn’t experiment, that it had to only be done the way it had been done for years.  I now know they were only teaching what they had been taught by someone that had been taught by someone else, ad infinitum.  They did not question the methods they had been shown, but they also had not been told they could change the rules and develop their own way, follow their own path.  Mainly because there were no instructions, I felt I had been thrust into something new and exciting.  I discovered time travel, going to the past and being able to relive history as it was occurring.   Because I didn’t know what could or could not be done, I chose to challenge the abilities of the mind and find out what was possible through hypnosis.

Stephanie: How does the Quantum Healing Technique work and what makes it different to other therapies?

Dolores: The Quantum healing Technique is a method I have developed over many years and most often has instant results.  I take the client into a very deep state of hypnosis and we explore past lives together.  I then ask the client’s subconscious to talk to me and this is where the healing begins.  The “Source of all Knowledge” or the “Higher Self” is used to facilitate instant healing and closure.  It can scan the body, looking for anything which needs healing and will then heal the body instantly.   It can also give the clients advice to help solve their problems in their lives because this part has the answers to everything and know everything about the person.

Stephanie: Have you had any memorable cases?

Dolores: I have regressed thousands of people and most of those have experienced instant healing.  I have had many cases of cancer being healed where the tumors are dissolved and absorbed.  Heart problems instantly corrected: valves fixed, arteries cleaned out, etc.  Diabetics no longer have to take shots of insulin.  Many cases have avoided back, knee and hip surgery and can walk fine and free from pain after the session.  If we can get to the person before they have surgery, it will not be needed.  We have found that every case of illness or disease has been created by the person themself,and during the session, we find the reason they have done this.  When this is discovered, the ailment disappears.  This can only be done through the deepest form of trance.

Stephanie: Is there anything that can’t be cured using your method?

Stephanie: Where did the term ‘Quantum Healing’ come from?

Dolores:  After teaching my technique for eight years calling it “Advanced Past Life Regression,” our students said we needed to change the name because it didn’t begin to describe what was actually being taught.  Since the technique centers around instant healing from a higher source, we came up with the name quantum healing.

Stephanie:  How is Quantum Healing different from normal past life regression?

Dolores:  In normal past life regression, the person is usually in the lighter trance states and some answers can be found from the past life, but the conscious mind is still very present.  This is the very beginning – the tip of the iceberg.  With Quantum Healing Hypnosis, we remove the conscious mind interference and work from the deepest possible level of trance, thus we can find the cause of the problem enabling instant healing.  This is a much more advanced technique.

Stephanie:   Are there any risks involved in using this kind of therapy?

Dolores:  My technique is full of safeguards that I have developed over forty years, so there are no risks if it is practiced correctly.

Stephanie: Are you the only one practicing this Technique, or are there other people who can do it too?

Dolores: Because it is my technique, I am the only one teaching it at this time.  We have trained thousands of people all over the world and they are allowed to practice it, but no one else is authorized to teach it.  Many of the people who have been trained in my technique and are practicing it are experiencing the same miraculous results.

Note from Stephanie:
I am very fortunate to have been regressed by Dolores and it is an experience I will never forget.  She took me through a very interesting lifetime and then asked to speak with my subconscious.  My subconscious mind began to speak about me in the third person, so although I was aware of what was being said, it was as though I was an observer of a conversation between Dolores and my subconscious.
For 20 years prior to my regression, I had suffered with severe reflux, or heartburn, which had resulted in a constantly inflamed esophagus and was in constant pain requiring strong drugs to ease this pain.  I was told there was no cure, except perhaps a risky operation, which may or may not work.
My subconscious scanned my body to look for energy imbalances and identified my stomach area.  Dolores asked what the cause of the pain was, and my subconscious replied that it was the difficult relationship I have with my Mother.  It said that I have never felt good enough.  She asked what it was going to do to help, and my subconscious replied that it was cutting the energetic chords between my Mother and myself.  This lasted a few minutes, during which time Dolores waited patiently.  She asked whether it was done yet, and my subconscious replied that it was.  She asked it to scan the rest of my body for anything else, but I am otherwise healthy and there no other issues.
From that day, almost 2years ago now, I have not experienced any pain whatsoever in my stomach neither have I needed to take any medication.
I can say from my own experience with Dolores’ healing technique that it works, and I am very grateful.