Janet Attwood: Many of our values and outlooks are formed in childhood. How did your early role models affect your outlook on health, wealth, and spirituality? 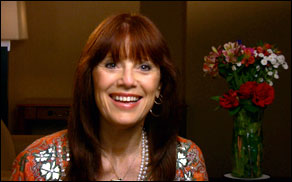 Marianne Williamson: I think my childhood was a mixed bag, as is true for most people. I received a lot of love from my parents, which is the most important thing. But I can’t say I grew up unscarred.

Recently at the Oscars, Blake Edwards won an award for Lifetime Achievement as a film director. In his acceptance speech he thanked his foes as well as his friends, saying that they had been equally important to his development. I pretty much realize that my challenges, past and present, are simply my lessons.

The 1950s, when I was born, were not a particularly conscious time in America, psychologically or emotionally. Teachers, parents, etc. everyone did the best they knew how.

I’m a mother now myself and I know that everything I’m doing is not perfect; my daughter will have her own parental issues. At a certain point its all just grist for the mill, helping you realize that only love is real and nothing else exists.

Charlie “Tremendous” Jones said that you will be the same today as you are 5 years from now except for two things, the people you meet and the books your read. Who has been the most influential person in your life – the person who has most affected who you are today? 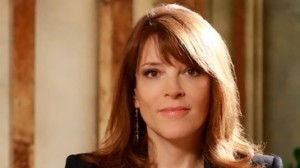 Janet Attwood: You know Marianne, you can put it however you want.

Marianne Williamson: Jesus, and my father.

Janet Attwood: So what are the most important books you’ve read?

Marianne Williamson: The most important books I’ve read are:
A Course in Miracles
The Bible
Letters to a Young Poet – Rilke
And for some reason, Pride and Prejudice.

Janet Attwood: Do you have a favorite quote?

Marianne Williamson: You know its funny; I have one right here that I like these days from Thomas Paine. It says, “He who dares not offend cannot be honest.”

Janet Attwood: I know you’re a woman of endless possibilities…

Marianne Williamson: That’s a big question. I suppose my career began the first day I picked up A Course in Miracles. My work as I understand it –which has and continues to take different forms — is to participate in a deeper conversation regarding what it means to be human, what our relationship is to God, and how we might live in a way that glorifies that relationship.

Janet Attwood: You said that your vocation started the day you picked up A Course in Miracles. What attracted you to that book?

Marianne Williamson: I don’t know what attracts any of us to a particular book – some word or paragraph just hits us like a brick to the forehead and we know these words are for us. That’s what happened to me. A Course in Miracles may not be for everyone, but if it’s for you, you know it.

Janet Attwood: Does a balance between health, wealth and spirituality play an important roll in your personal and business life?

Marianne Williamson: I can’t say that health, wealth, and spirituality flow together in my mind, but I recognize all of them as simply reflections of energy. Health and wealth are matters of form, not content, and as such are effect and not cause. I try to concern myself most with the level of cause, with the things that do not change, and when I do that, the level of effect seems to take care of itself. I think if I concern myself with eternal issues, then more temporal ones fall into place more easily.

Janet Attwood: Has a lack of balance in your life ever harmed you or kept you from reaching your goals?

Marianne Williamson: Absolutely. Nor would I claim that my life is perfectly balanced today. We like to think that things get better with time, but I would be dishonest if I said that has always been the case with me. I don’t think this moment in my life is one of my most balanced periods, but I see that and I am trying to address it.

Janet Attwood: Do you ever find it challenging to do the things that you teach and what have you learned from those challenges?

Marianne Williamson: I find it challenging to live what I teach, a lot of the time. The top of one mountain is always the bottom of the next. Anytime you pass the 6th grade the Universe has the 7th grade planned for you. I am faced with the same challenges and opportunities everyone else is. I’m learning to be more malleable, hopefully, so God can move my heart around more easily.

Janet Attwood: What part has fear played in helping you achieve your goals or holding you back?

Marianne Williamson: Fear is never a help. It has stopped me, as it has stopped others. It is, according to A Course in Miracles, the only real problem we have.

Janet Attwood: Has it ever stopped you from achieving a major goal that you’ve had?

Janet Attwood: So how do you personally deal with your fears?

Marianne Williamson: A Course in Miracles says that love casts out fear, as light casts out darkness. I do not seek to deny my fear, or even to destroy my fear. I seek to recognize it and release it to the hands of God, to live a more loving life, to grow and learn. As we grow in love, fear does dissolve. Slowly but surely…

Janet Attwood: What do you feel has been the greatest accomplishment in your life so far?

Marianne Williamson: That I have a happy child.

Janet Attwood: How old is she?

Janet Attwood: Oh that’s great. That is a GREAT accomplishment.

What, if any, setbacks have you encountered along the way, and how has overcoming them colored who you are today?

Marianne Williamson: I don’t want to get too personal about my private trials and tribulations. I know the wounds I have because of them, and I see my greatest work as transcending them. The vast majority of those wounds, by the way, were self-inflicted. I recognize that.

Janet Attwood: We believe strongly in intention to manifest outcomes. What is your current most important project and what intention would you like us at Healthy Wealthy nWise to hold with you?

Marianne Williamson: My greatest intention is that my daughter be well mothered.

My second greatest intention is that I contribute in whatever way I can to putting the Democrats back in power this year.

What are the three main things you know now that you wish you’d known earlier in life?

Janet Attwood: You write about the connection between everyday living and spiritual life. Why is this connection so important?

Marianne Williamson: Spirituality is somewhat meaningless if we’re not actually living it. We are trained by the world to think non-loving thoughts, and the spiritual quest is a retraining, a return to the love the world resists.

Janet Attwood: Thank you for that.

A Return to Love touched many people’s hearts. Why is this topic so important to so many people, and what is the biggest challenge to returning to love?

Marianne Williamson: All of us want love; its our spiritual, emotional, and psychological oxygen. We feel its absence at the core of our being, and yearn for it constantly. Once again it’s the fear-based thinking of the world, the judgments, the guilt tripping, the blame and condemnation, which lie at the core of ego thinking. Our capacity and willingness to transcend that thinking, to bless instead of blame, to love instead of fear, to unite instead of separate ourselves from others is the essence of the spiritual journey. It’s our return home.

Janet Attwood: If you could give our readers one piece of advice on how to move toward a more balanced abundance in their lives, what would it be?

Marianne Williamson: To meditate in the morning

Janet Attwood: Great! And what is the single most important piece of advice you’d like to leave the readers with that we haven’t yet discussed?

Marianne Williamson: If all of us try to forgive one person a day, the world will change more radically than we know.

Janet Attwood: Beautiful. Do you have any new books coming out?

Marianne Williamson: Yes, in October Everyday Grace will be coming out in paperback and in November my new book The Gift of Change will be released.

Janet Attwood: And if people want to find out more about what you’re doing where can they go for information?

Marianne Williamson: They can go to my website at http://www.Marianne.com

Janet Attwood: Wonderful. So do you have any parting thoughts Marianne?

Marianne Williamson: Parting thoughts… you’re doing a good job, and I really appreciate your having me. God bless everyone…