A bright purple flower could play a role in protecting against skin cancer, according to two new studies. 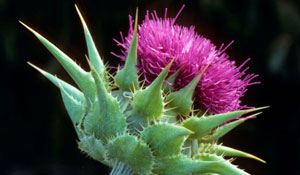 New research from the University of Colorado Cancer Center shows that not only does milk thistle extract, called silibinin, protect against skin cancer-causing ultraviolet-B (UVB) radiation, but it also kills cells that have undergone mutations due to ultraviolet-A (UVA) radiation — a process that would potentially lead to cancer.

“We first noticed its effectiveness in treating both skin and solid cancers, and we now have a much more complete picture of the mechanisms that allow this compound to work,” study researcher Rajesh Agarwal, Ph.D., a professor and co-program leader of Cancer Prevention and Control at the university, said in a statement.

In one study, published in the journal Photochemistry and Photobiology, researchers found that treating cells damaged by UVA radiation with silibinin effectively killed them. Plus, they found that silibinin didn’t damage regular, non-mutated skin cells, meaning “it’s not toxic,” Agarwal explained.

In the other study, published in the journal Molecular Carcinogenesis, the researchers found that the silibinin actually had a protective effect against UVB rays by upping cell expression of a particular cell-repairing protein.

Milk thistle is known to have antioxidant and anti-inflammatory properties, and has been used for treating liver problems, according to WebMD.