by Osho: Yoga is not a religion-remember that. Yoga is not Hindu, it is not Mohammedan. Yoga is a pure science just like mathematics, physics or chemistry. 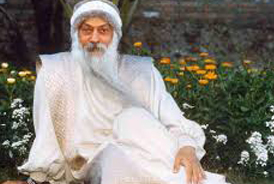 Yoga is pure science, and Patanjali is the greatest name as far as the world of yoga is concerned. This man is rare. There is no other name comparable to Patanjali. For the first time in the history of humanity, this man brought religion to the state of a science: he made religion a science, bare laws; no belief is needed. Because so-called religions need beliefs. There is no other difference between one religion and another; the difference is only of beliefs. A Mohammedan has certain beliefs, a Hindu certain others, a Christian certain others. The difference is of beliefs. Yoga has nothing as far as belief is concerned; yoga doesn’t say to believe in anything. Yoga says experience. Just like science says experiment, yoga says experience. Experiment and experience are both the same, their directions are different. Experiment means something you can do outside; experience means something you can do inside. Experience is an inside experiment.

Science says: Don’t believe, doubt as much as you can. But also, don’t disbelieve, because disbelief is again a sort of belief. You can believe in God, you can believe in the concept of no-God. You can say God is, with a fanatic attitude; you can say the quite reverse, that God is not with the same fanaticism. Atheists, theists, are all believers, and belief is not the realm for science. Science means experience something, that which is; no belief is needed. So the second thing to remember: Yoga is existential, experiential, experimental. No belief is required, no faith is needed — only courage to experience. And that’s what’s lacking. You can believe easily because in belief you are not going to be transformed. Belief is something added to you, something superficial. Your being is not changed; you are not passing through some mutation. You may be a Hindu, you can become Christian the next day. Simply, you change: you change Gita for a Bible. You can change it for a Koran, but the man who was holding Gita and is now holding the Bible, remains the same. He has changed his beliefs.

Belief is easy because you are not required really to do anything — just a superficial dressing, a decoration, something which you can put aside any moment you like. Yoga is not belief. That’s why it is difficult, arduous, and sometimes it seems impossible. It is an existential approach. You will come to the truth, but not through belief, but through your own experience, through your own realization. That means you will have to be totally changed. Your viewpoints, your way of life, your mind, your psyche has to be shattered completely as it is. Something new has to be created. Only with that new will you come in contact with the reality.

So yoga is both a death and a new life. As you are you will have to die, and unless you die the new cannot be born. The new is hidden in you. You are just a seed for it, and the seed must fall down, absorbed by the earth. The seed must die; only then the new will arise out of you. Your death will become your new life. Yoga is both a death and a new birth. Unless you are ready to die, you cannot be reborn. So it is not a question of changing beliefs.

Yoga is not a philosophy. I say it is not a religion, I say it is not a philosophy. It is not something you can think about. It is something you will have to be; thinking won’t do. Thinking goes on in your head. It is not really deep into the roots of your being; it is not your totality. It is just a part, a functional part; it can be trained. And you can argue logically, you can think rationally, but your heart will remain the same. Your heart is your deepest center, your head is just a branch. You can be without the head, but you cannot be without the heart. Your head is not basic.

Patanjali is rare. He is an enlightened person like Buddha, like Krishna, like Christ, like Mahavira, Mohammed, Zarathustra, but he is different in one way. Buddha, Krishna, Mahavira, Zarathustra, Mohammed no one has a scientific attitude. They are great founders of religions. They have changed the whole pattern of human mind and its structure, but their approach is not scientific.

Patanjali is like an Einstein in the word of Buddhas. He is a phenomenon. He could have easily been a Nobel Prize winner like an Einstein or Bohr or Max Planck, Heisenberg. He has the same attitude, the same approach of a rigorous scientific mind. He is not a poet; Krishna is a poet. He is not a moralist; Mahavira is a moralist. He is basically a scientist, thinking in terms of laws. And he has come to deduce absolute laws of human being, the ultimate working structure of human mind and reality.

And if you follow Patanjali, you will come to know that he is as exact as any mathematical formula. Simply do what he says and the result will happen. The result is bound to happen; it is just like two plus two, they become four. It is just like you heat water up to one hundred degrees and it evaporates. No belief is needed: you simply do it and know. It is something to be done and known. That’s why I say there is no comparison. On this earth, never a man has existed like Patanjali.

You can find in Buddha’s utterances, poetry — bound to be there. Many times while Buddha is expressing himself, he becomes poetic. The realm of ecstasy, the realm of ultimate knowing, is so beautiful, the temptation is so much to become poetic, the beauty is such, the benediction is such, the bliss is such, one starts talking in poetic language.
But Patanjali resists that. It is very difficult. No one has been able to resist. Jesus, Krishna, Buddha they all become poetic. The splendor, the beauty, when it explodes within you, you will start dancing, you will start singing. In that state you are just like a lover who has fallen in love with the whole universe.

Source – Osho Book “Yoga : The Alpha and the Omega, Vol1”