The Task of Spiritual Science

by Rudolf Steiner: There is a beautiful saying by Hegel: The most profound thought is bound up with the historical, external Figure of Christ. And the greatness of the Christian religion is that it is there for every stage of development. 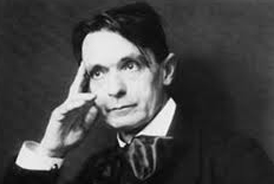 It is within the grasp of the most naive consciousness and at the same
time it is a challenge to the deepest wisdom.

That the Christian religion is comprehensible to every stage of
consciousness is shown by the very history of its development. Properly
understood, it must be the task of Theosophy, or of Spiritual Science in
general, to show that the Christian religion calls for penetration into the
deepest Wisdom-teachings. Theosophy is not a religion, but an
instrument for understanding the religions. Its relation to the religious
documents is rather like the relation of mathematics itself to the writings
in which it was originally taught. A man can understand mathematics
through his own spiritual faculties and comprehend the laws of space
without having to refer to any such early text. But if he has really
absorbed the truths of geometry, he will value all the more highly the
original texts through which these laws were first presented. So it is with
Theosophy. Its sources are not in ancient documents, nor do they rest
upon tradition; they lie in the reality of the spiritual worlds. It is there
that they must be found and grasped by the development of a man’s own
spiritual powers, just as he grasps mathematics by endeavouring to
develop the faculties of his intellect. Our intellect, by means of which we
are enabled to comprehend the laws of the world of sense, is supported
by an organ, the brain. Similarly, in order to grasp the laws of spiritual
worlds, we need appropriate organs.

How have our physical organs developed? Because forces from outside
have worked upon them: the forces of the Sun, the forces of sound. Thus
did eyes and ears come into being – out of neutral, sluggish organs into
which, at first, the sense-world could not penetrate, and which opened
only by degrees. If our spiritual organs are worked upon by the right
forces, they too will open.

What then are the forces which surge in upon our still inert spiritual
organs? During the daytime, the astral body of modern man is assailed by
forces that work against his development, and even destroy such organs
as he formerly possessed before the dawn of his clear day-consciousness.
In earlier times, man received direct astral impressions. The surrounding
world spoke to him through pictures, through the form in which the astral
world comes to expression. Living, inwardly organic pictures and colours
hovered freely in surrounding space as expressions of pleasure and
repugnance, sympathy and antipathy. Then these colours wrapped
themselves, as it were, round the surface of things, and objects acquired
fixed outlines. This was when the physical body of man was steadily
gaining in solidity and becoming more highly organized. When his eyes
opened fully to the physical light, when the veil of Maya spread itself
over the spiritual world, his astral body received impressions of the
surrounding world by way of the physical and etheric bodies. The astral
body itself transmitted these impressions to the `I’ and from the `I’ they
passed into his consciousness. Thus he was personally involved and
continuously active. But the forces working upon him were no longer
plastic, weaving forces akin to the nature of his own being; they were
forces that fed upon him, destroyed him, in order to awaken the I-
consciousness. Only in the night, when he sank down into the rhythmic-
spiritual world homogeneous with him, did he acquire new strength and
become able once more to feed forces into his physical and etheric
bodies. Out of this conflict of impressions, out of the deadening of the
astral organs formerly working unconsciously in man, the life of the
individual `I’, the I-consciousness, arose. Out of life-death; out of death-
life. The ring of the serpent was complete. And now from this wakened I-
consciousness there had to arise forces that would kindle life again in the
defunct vestiges of earlier astral organs, shaping and moulding them.

Mankind is moving towards this goal, guided by its Teachers and
Leaders, the great Initiates, of whom the serpent is also the symbol. It is
an education towards freedom, hence a slow and difficult education. The
great Initiates could have made the task easier, for themselves and for
man, if they had worked upon his astral body during the night, when it is
free, in such a way as to impress the astral organs into it from outside.
But such an act would have operated in man’s dream-consciousness; it
would have trespassed on his sphere of freedom. The highest principle in
man, the Will, would never have unfolded. Man is led onward stage by
stage. There has been an Initiation in Wisdom, an Initiation in Feeling, an
Initiation in Will. True Christianity is the summation of all stages of
Initiation. The Initiation of antiquity was the prophetic announcement,
the preparation. Slowly and gradually the man of later times emancipated
himself from his Initiator, his Guru. Initiation, to begin with, proceeded
in deep trance-consciousness, but was equipped to imprint in the physical
body a remembrance of what had transpired outside the body. Hence the
necessity of releasing the ether-body, the bearer of memory, as well as the
astral body. Astral body and ether-body sank together into the Ocean of
Wisdom, into Mahadeva, into the Light of Osiris. This Initiation
proceeded in deepest secrecy, in absolute seclusion. No breath from the
outer world might intrude. The man was as if he had died to outer life,
and the tender seeds were nurtured away from the blinding light of day.

Then Initiation came forth from the darkness enshrouding the Mysteries
into the clearest light of day. In a great and mighty Personality, the Bearer
of the highest unifying Principle, of the Word – of Him who is the
expression and manifestation of the hidden Father, and who taking on
human form became the Son of Man and thereby the Representative of
all mankind, the Bond uniting all I’s – in Christos, the Life-Spirit, the
Eternal Unifier, the Initiation of mankind as a whole was accomplished,
as historical fact and at the same time as symbol, on the plane of feeling.
So potent was this Event that in every individual who modelled his life
on it, its power could continue to work – right into the physical,
expressing itself even in the appearance of the stigmata and in the most
piercing pains. Feelings were shaken to their innermost depths. An
intensity of emotion, the like of which has never surged through the
world before or since, arose in mighty waves. In the Initiation on the
Cross of Divine Love the sacrifice of the `I’ for All had taken place. The
blood, the physical expression of the `I’ had flowed in love for mankind,
and the effect was such that thousands pressed forward to this Initiation,
to this Death, letting their blood flow in love and devotion for mankind.
That blood untold was poured out in this way has never been sufficiently
emphasized; the thought no longer enters the consciousness of men, not
even in theosophical circles. Yet the waves of ardour which in this
streaming blood flowed down, and then ascended, have fulfilled their
task. They have become the wellsprings of powerful impulses. They have
made mankind ripe for the Initiation of the Will.

And this is the legacy of Christ.