We Are All Connected

by Gregg Braden:  The existence of a primal web of energy that connects our bodies, the world, and everything in the universe opens the door to a powerful and mysterious possibility, 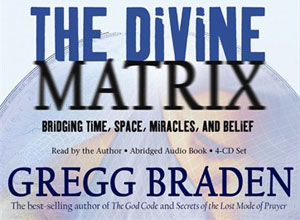 and suggests that we may be much more than simply observers passing through a brief moment of time in a creation that already exists.  As far-fetched as this idea might sound to many people, it is precisely at the crux of the greatest controversies among many of the most brilliant minds in recent history. In a quote from his autobiographical notes, Albert Einstein shared his belief that we’re essentially passive observers living in a universe already in place, one in which we seem to have little influence: “Out yonder there was this huge world,” he said, “which exists independently of us human beings and which stands before us like a great, eternal riddle, at least partially accessible to our inspection and thinking.”

In contrast to Einstein’s perspective, which is still widely held by many scientists today, John Wheeler, a Princeton physicist and colleague of Einstein, offers his radically different view of our role in creation. In terms that are bold, clear, and graphic, Wheeler says, “We had this old idea, that there was a universe out there, and here is man, the observer, safely protected from the universe by a six-inch slab of plate glass.” Referring to the late 20th century experiments that show us how simply looking at somethingchanges that something, Wheeler continues, “Now we learn from the quantum world that even to observe so minuscule an object as an electron we have to shatter that plate glass: we have to reach in there . . . . So the old word observer simply has to be crossed off the books, and we must put in the new word – participator.”

What a shift! In a radically different interpretation of our relationship to the world we live in, Wheeler states that it’s impossible for us to simply watch the universe happen around us. Experiments in quantum physics, in fact, do show that simply looking at something as tiny as an electron – just focusing our awareness upon what it’s doing for even an instance in time – changes its properties while we’re watching it. The experiments suggest that the very act of observation is an act of creation. These findings seem to support Wheeler’s proposition that we can no longer consider ourselves merely onlookers who have no effect on the world that we’re observing.

Perhaps things are able to travel faster than the speed of light, and maybe they can be in two places at once! And if things have this ability, what about us?

To think of ourselves as participating in creation rather than simply passing through the universe during the brief period of a lifetime requires a new perception of what the cosmos is and how it works. The groundwork for such a radical worldview was the basis for a series of books and papers by another Princeton physicist and colleague of Einstein, David Bohm, who left us with two pioneering theories that offer a different view of the universe and our role in it.

The first is an interpretation that opened the door to what Bohm called the “creative operation of underlying . . . levels of reality.” The second theory was an explanation of the universe as a single unified system of nature, and laid the foundation for his pioneering work, Wholeness and the Implicate Order. In it, Bohm proposed that if we could see the universe in its entirely from a higher vantage point, the objects in our world would in fact appear as a projection of things happening in another reality that we cannot observe. He viewed both the seen as well as the unseen as expressions of a greater, more universal order. From his perspective, what we see as our world is actually the projection of something even more real that’s happening at a deeper level of creation.

Thus, modern science is hot on the trail of solving one of the greatest mysteries of all time. You may not hear about it during the evening news, and you probably won’t see it on the front page of USA Today or the Wall Street Journal.

Yet nearly seventy years of research in an area of science know as the “new Physics” is pointing to a conclusion that we can’t escape: Everything in our world is connected to everything else.

That’s it — really! That’s the news that changes everything and is absolutely shaking the foundation of science as we know it today.

The “small shift” that we need is to see ourselves as part of the world rather than separate from it.

“Okay,” you say, “we’ve heard this before. What makes this conclusion so different? What does it really mean to be so connected?” These are very good questions, and the answer may surprise you. The difference between the new discoveries and what we previously believed is that in the past we were simply told that the connection exists. Through technical phrases such as “sensitive dependence on initial conditions” (or, “the butterfly effect”) and theories suggesting that what we do “here” has an effect “there,” we could vaguely observe the connection playing out in our lives. The new experiments, however, take us one step beyond.

In addition to proving that we’re linked to everything, research now demonstrates that the connection existsbecause of us. Our connectedness gives us the power to stack the deck in our favor when it comes to the way our lives turn out. In everything from searching for romance and healing our loved ones to the fulfillment of our deepest aspirations, we are an integral part of all that we experience each day.

The fact that the discoveries show that we can use our connection consciously opens the door to nothing less than our opportunity to tap the same power that drives the entire universe. Through the oneness that lives inside of you, me, and all humans who walk the planet, we have a direct line to the same force that creates everything from atoms and start to the DNA of life!

There’s one small catch, however: Our power to do so is dormant until we awaken it. The key to awakening such an awesome power is to make a small shift in the way we see ourselves in the world. With a small shift of perception we can tap the most powerful force in the universe in order to address even seemingly impossible situations. This happens when we allow ourselves a new way of seeing our role in the world.

Because the universe seems like a really big place – almost too vast for us to even think about – we can begin by seeing ourselves differently in our everyday lives. The “small shift” that we need is to see ourselves as part of the world rather than separate from it. The way to convince ourselves that we’re truly one with everything that we see and experience is to understand how we’re joined and what that connection means.

Through the connection that joins all things, the “stuff” that the universe is made of (waves and particles of energy) appears to break the laws of time and space as we once knew them. Although the details sound like science fiction, they’re very real. Particles of light (photons), for example, have been observed to bilocate – that is to be in two different places separated by many miles at precisely the same instant.

In addition to proving that we’re linked to everything, research now demonstrates that the connection exists because of us.

From the DNA of our bodies to the atoms of everything else, things in nature appear to share information more rapidly than Albert Einstein predicted anything could travel – faster than the speed of light. In some experiments, data has even arrived at its destination before it has left its place of origin! Historically, such phenomena were believed to be impossible, but apparently they’re not only possible, they also may be showing us something more than just the interesting anomalies of small units of matter. The freedom of movement that the quantum particles demonstrate may reveal how the rest of the universe works when we look beyond what we know of physics.

While these results may sound like the futuristic script of a Star Trek episode, they’re being observed now under the scrutiny of present-day scientists. Individually, the experiments that produce such effects are certainly fascinating and deserve more investigation. Considered together, however, they also suggest that we may not be as limited by the laws of physics as we believe. Perhaps things areable to travel faster than the speed of light, and maybe they can be in two places at once! And ifthings have this ability, what about us?

These are precisely the possibilities that excite today’s innovators and stir our own imaginations. It is in the coupling of the imagination – the idea of something that could be – with an emotion that gives life to a possibility that it becomes a reality. For the imaginary ideas of one moment in time to become the reality of another, there must be something that links them together. Somehow within the fabric of the universe there must be a connection between past imaginings and present and future realities. Einstein firmly believed that the past and the future are intimately entwined as the stuff of the fourth dimension, a reality that he called space-time. “The distinction between past, present, and future,” he said, “is only a stubbornly persistent illusion.”

So, in ways that we are only beginning to understand, we find that we’re connected not only with everything that we see in our lives today, but also with everything that’s ever been, as well as things that haven’t happened yet. And what we’re experiencing now is the outcome of events that have occurred (at least in part) in a realm of the universe that we can’t even see.

The implications of these relationships are huge. In a world where an intelligent field of energy connects everything from global peace to personal healing, what may have sounded like fantasy and miracles in the past suddenly becomes possible in our lives.