Why you should care about Ken Wilber and Integral Maps

Ken Wilber:  Ever wonder who you’re kidding? Or, on the other end of the spectrum, do you every wonder if you’re being bamboozled? Where, exactly, do *you* stand on the evolutionary scale of human consciousness,

from an (arguably) scientific point of view? 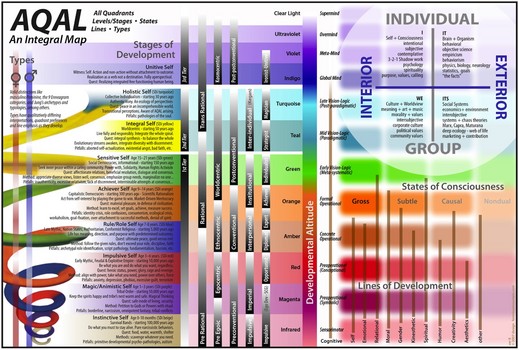 Ken Wilber has constructed such a point of view. An accomplished scholar and genius who has written more than two dozen books, Wilber studied the world’s significant religions, Eastern and Western philosophy, biology and psychology. He was able to create a synthesis, which he calls ‘Integral Theory‘.

Integral Theory gives us a framework, or map, for States of human consciousness and Stages of human development. The intersection of these two coordinates, your State, and your Stage, is your address on the map. You can then use this information to see where you are in relation to what is possible and what has already been accomplished. It is a reality check for your attitude. Are you really ‘all that’? Or are you perhaps undervaluing your awareness level? Wouldn’t you like to know? 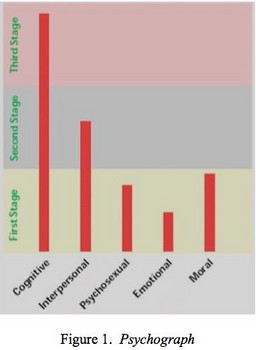 “Everybody is a genius. But if you judge a fish by its ability to climb a tree, it will live its whole life believing that it is stupid.” – Albert Einstein

According to Wilber, a person’s development along each of these streams of intelligence makes up their developmental profile, or ‘psychograph’. These tells us how conscious, or aware we are in each area. Pathology, such as disease, criminality, mental illness, or an inability to match one’s socks, can exist along any of these lines of intelligence as well.

Can you see how it might be helpful to know where your strengths and weaknesses lie, or to be ‘integrally informed’? Are you ‘book smart’ but not athletic or graceful? Do you understand the information underneath each of your emotions and those of others, or are you still reenacting unconscious behaviors? Are you moral, yet unaware of the nuances of your own sexuality? Are any of your lines unhealthy or weak, for example, do you smoke?

To determine your Stage, each intelligence is assessed. Most people have a ‘center of gravity’ in terms of where we operate on this developmental scale. In general, we gravitate around a certain level of development, contributing to our overall way of being (and how we are perceived) in the world. On ‘bad days’ or in unexpected situations, we may become juvenile, selfish, rude or ignorant. We may act out even though we know better. On ‘good days’, we sometimes surpass ourselves. Our psychological ‘shadow‘ may affect our perception of ourselves or other’s perception of us. In general, most of us maintain a certain developmental altitude. This is our ‘Stage’.

Can you see how you might round-out your intelligences? This is very important, because whereas States come and go, Stages are permanent milestones of development. Non-dual States are experienced by everyone when we are infants, and can be re-experienced by some of us via transmission from a master or through self-effort. But Stages of development are cumulative and earned only through maturity. The higher Stages have only recently appeared in human evolution, thus they are considered ‘Post-Modern’. 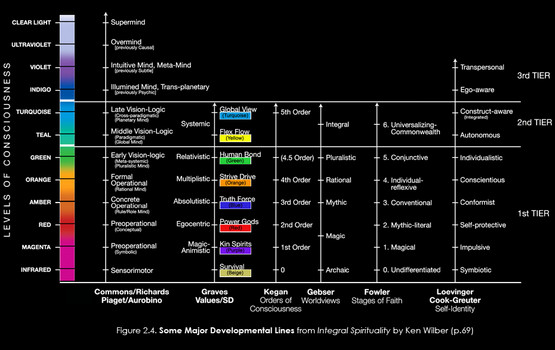 “It’s not easy being green.” – Kermit the Frog

Anyone interested in this series of articles is probably operating at least on the Rational (Orange) level according to Wilber’s Map, and more likely, at a Pluralistic (Green) level. Some of us may have our center of gravity at the Integral (Turquoise) level. Rarest are those who consistently operate in the Super Integral (Indigo and beyond) territory.

Our Stage is our baseline altitude of consciousness, as processed through our multiple intelligences. Please remember that this is just a map, a tool that helps you know where you are and how to proceed. It is not, as my Roshi often points out during our retreats, the territory. In other words, don’t so caught up in self-analysis that you miss the point – the taming of the ego.

Below is brief top-down list of levels. It’s my synthesis of Wilber’s Levels, with additional input from Spiral Dynamics and Jane Loevinger’s stages of ego development. As I’m no expert on Wilber or developmental psychology, I could use your help in filling it out and keeping it short. Unfortunately, the Examiner format does not allow for insertion of charts or pretty pictures that could speak a thousand words, but you can also review the article photos and links for more information.

Stages or Levels of Development

Although you might think you can accurately self-assess your Stage, that’s actually not true. Others’ perception of us is important in our Stage assessment, because they can usually see the shadows and unconscious projections that we might miss. An accurate assessment of our Stage can only be complete if it integrates the perceptions of others. There are those who claim they can perform such assessments, such as Susan Cook-Greuter. I have taken her MAP Assessment and although it was valuable for me, it was not worth the fee. However, if you’re curious, and especially if your company will pay for it as leadership training budget item, go for it!

So when does the fun Enlightenment stuff enter the pictures? Where do meditation, spirituality, samadhi, bliss, ecstatic and altered states of consciousness fit in? 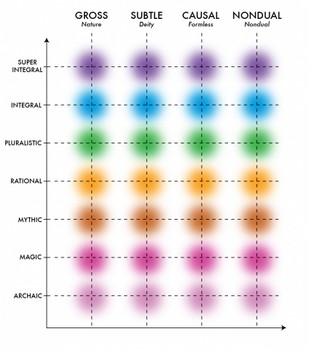 Is it possible for someone to appear Enlightened – to exude subtle gold light from their aura, and perform miracles or siddhis, while remaining rooted in the earlier developmental stages, such as the Magical, Mythical or Rational stage? You betcha! In fact, for thousands of years, and in worldwide cultures, prophets, saints, messiahs, sorcerers, shamen, teachers and gurus have done exactly that.

The reason is because higher Stages (also known as ‘structures’) of development continue to emerge as humanity, and human consciousness, matures. The Mythical Stage evolved 5000 years ago, and the next Stage, the Rational one, did not emerge until the European Enlightenment about 300 years ago. Pluralism? Fuggedaboutit – it only evolved about a hundred years ago, and not obviously until the LSD-enhanced 1960s. And Integral? Sheesh, didn’t see that emerge until the 1930s or so, and it’s still rare.

Despite their spiritual genius, Jesus and Buddha (for example) were not living in the same structural mentality as that of most readers of this column today, because it hadn’t evolved yet as a mental construct. We are structurally more developed consciously, if our Stage is Rational mind, Pluralistic mind, Integral or Super Integral Consciousness. They were in the Mythical Stage at best (which is the majority mental reality of the world population today, according to studies researched). Yet, they were divine, surely touching sublime States in their meditations and transmitting light in legendary quantities. So how does that work? What’s important here?