Although little is known about the life of Bodhidharma, as the founder of Ch’an (Zen) Buddhism his influence permeates the culture of Asia and now the West. The story of his life has been preserved in legend. 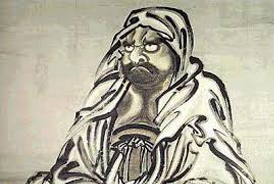 Bodhidharma was a monk from India who studied with Prajnadhara. Some time after completing his studies he left India for China.

To the Shaolin Temple:

Bodhidharma traveled north to the Shaolin Temple. For nine years he sat in meditation in a cave near the temple. According to legend, at one point he was frustrated by his own drowsiness and so ripped off his eyelids.

No Coming, No Going:

Some legends say Bodhidharma returned to India before his death. Others say he lived to be 150 and was buried in the mountains of Honan, China. Some time later a pilgrim encountered Bodhidharma walking back to India, wearing only one sandal. When his grave was opened it was empty, save for one sandal.