Chuang Tzu: The Next Voice

Chuang Tzu (399 – 295 B.C.) has always been an influential Chinese philosopher. His writing is at once transcendental while at the same time being deeply immersed within everyday life. 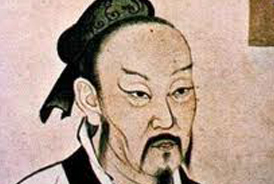 Chuang Tzu took the Taoist position of Lao Tzu and developed it further. He took Lao Tzu’s mystical leanings and perspectives and made them transcendental. His understanding of virtue (te) as Tao individualized in the nature of things is much more developed and clearly stated. There is also a greater and more exact attention to Nature and the human place within it which also leads to his greater emphasis on the individual.

A very interesting and new notion which he brought into Chinese philosophy is that of self-transformation as a central precept in the Taoist process (an understanding that has also penetrated to the heart of Tai Chi Chuan). He believed in life as dynamic and ever changing, making him akin to both Heraclitus and Hegel in these regards. In general, our contemporary understanding of Taoist philosophy is deeply predicated on a very thorough intermingling of the ideas of Lao Tzu and Chuang Tzu.

Chuang Tzu believed that life is transitory and that the pursuit of wealth and personal aggrandizement were vain follies, which distracted from seeing and understanding the world and contemplating its meaning. He strove to see nature with new eyes. For instance:

“Do the heaven’s revolve? Does the earth stand still? Do the sun and the moon contend for their positions? Who has the time to keep them all moving? Is there some mechanical device that keeps them going automatically? Or do they merely continue to revolve, inevitably, of their own inertia?

“Do the clouds make rain? Or is it the rain that makes the clouds? What makes it descend so copiously? Who is it that has the leisure to devote himself, with such abandoned glee, to making these things happen?”

Chuang Tzu felt it was imperative that we transcend all the dualities of existence. Seeing Nature at work and the way in which it reconciled these polar opposites pointed the way to the Tao where all dualities are resolved into unity.

“The universe is the unity of all things. If one recognizes his identity with this unity, then the parts of his body mean no more to him than so much dirt, and death and life, end and beginning, disturb his tranquillity no more than the succession of day and night.”

“The sage has the sun and the moon by his side. He grasps the universe under his arm. He blends everything into a harmonious whole, casts aside whatever is confused or obscured, and regards the humble as honorable. While the multitude toil, he seems to be stupid and non-discriminative. He blends the disparities of ten thousand years into one complete purity. All things are blended like this and mutually involve each other.”

As to the nature of the Tao itself Chuang Tzu’s conception was remarkably similar to that of Lao Tzu.

One of Chuang Tzu’s continuing interests was the issue of the interchangibility of appearance and reality. He sometimes asks (almost in a Cartesian way), ‘How can we be sure of what we are seeing?

“Those who dream of the banquet may weep the next morning, and those who dream of weeping may go out to hunt after dawn. When we dream we do not know that we are dreaming. In our dreams we may even interpret our dreams. Only after we are awake do we know that we have dreamed. But there comes a great awakening, and then we know that life is a great dream. But the stupid think they are awake all the time and believe they know it distinctly.

By exploring such paradoxes Chaung Tzu reveals that much of the meaning of the world is bound up in apparent contradictions.

Taoist philosophy exerted a great influence on the developing school of Chan (Zen) Buddhism in China. Many of the understandings of Taoists and Zen Buddhists are very similar.

“The mind of the perfect man is like a mirror. It does not lean forward or backward in response to things. It responds to things but conceals nothing of its own. Therefore it is able to deal with things without injury to [its reality].”

This is a very similar metaphor to that of Zen (and for that matter Confucianism). The difference is that for Zen Buddhists it indicates a reality which has to be transcended to attain enlightenment, whereas for Taoists and Confucians it is a metaphor for reality which needs to be responded to faithfully (like a mirror).

“The universe gives me my body so that I may be carried, my life so I may toil; my old age so I may repose, and my death so I may rest. To regard life as good is the way to regard death as good. A boat may be hidden in a creek or a mountain in a lake. These may be said to be safe. But at midnight a strong man may come and carry it away on his back. An ignorant person does not know that even when the hiding of things, large or small, is perfectly well done, still something will escape you. But if the universe is hidden in the universe itself, then there can be no escape from it. This is the great truth of things in general.

We posses our body by chance and we are already pleased with it. If our physical bodies went through ten thousand transformations without end, how incomparable would this joy be! Therefore the sage roams freely in the realm in which nothing can escape and all endures. Those who regard dying a premature death, getting old, and the beginning and the end of life as equally good are followed by others. How much more is that to which all things belong and on which the whole process of transformation depends (that is, Tao)?”

It is worth noting that there is no sign in either Lao Tzu or Chuang Tzu of a religious inclination (ascribing events and processes to a pantheon of deities, etc.) of the kind which later adherents beset Taoism with. Taoism evolved as a philosophy without the religious trappings that later followers felt they had to add to the movement.

It is also free of any trace of divination, alchemy, searches for an elixir of life and all the other strains of occultism that later attached themselves to this philosophy.