by Sheldon Litt, Ph.D.: Gestalt therapy was originated about fifty years ago by Frederick ‘Fritz’ Perls (1893-1970) in collaboration with Paul Goodman. 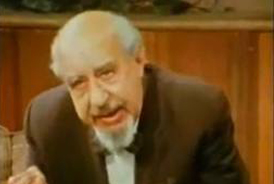 Perls was born in Berlin and educated in medicine and psychoanalysis. But he later became interested in ideas beyond Freud, partly due to his wife, Laura Posner, a psychologist who had contact with the early Gestalt school of experimental psychology.

Influenced by neurologist Kurt Goldstein, Max Wertheimer, Martin Buber, and others, Perls began to question orthodox psychoanalytic doctrine. His first book, Ego, Hunger and Aggression gives a penetrating critique of Freudianism from the holistic and semantic viewpoints, such as his condemnation of the many misleading abstractions in the analytic terminology.

Perls also borrowed from the academic work of the early Gestalt psychologists, who were mainly concerned with lab experiments in perception. He applied their principles of perceptual organisation to understanding the structure of the human personality as it functions within the organism/environment field.

This first book is significant because in addition to criticising Freud, it also lays the groundwork for a new system of psychotherapy.

This novel approach is tentatively called ‘concentration therapy’, aiming at synthesis, not cold analysis, calling for a natural holistic approach to body and mind, and a fresh face-to-face encounter between therapist and patient. (One of Perls’ criticisms of Freud was that by putting the patient on the couch, an artificial situation is created, one that brings the patient even further from good contact, and the subsequent goal of personality integration.)

This short, but original book can serve as a valuable introduction for those interested in how Perls’ work developed out of his early analytic training.

One of Perls’ major contributions to the psychology of the second half of the 20th century is that he offers an alternative to the domination of the Freudian juggernaut.

What is Gestaltian about it? Just as psychoanalysis is based on association theory (viz. ‘free association’) and behaviour therapy rests on the stimulus-response learning model, it was the aim of Perls to construct a new method based on Gestalt’s psychological principles.

Wertheimer and the academic Gestalt school had made valuable contributions to perception and cognitive theory, but they neglected the broader realm of personality, psychopathology, and psychotherapy. Perls, however, tried to carry their insights further into this larger arena. Personality, thus conceived, is not organised according to the additive style of behaviourism, nor in associative-symbolic Freudian terms, but instead can be construed as following a ‘Gestalt’ or configurational pattern. The culmination of these efforts to construct a new system of therapy is reached in his second, and major book, Gestalt Therapy.

Perls escaped from Hitler’s regime in 1933, moving to South Africa. After the war, he emigrated to New York, where he met New Yorker, Paul Goodman (1911-1972), a renaissance man who wrote poetry, novels and studies of psychology and linguistics. An outspoken Bohemian character, Goodman had already been dismissed from teaching posts because of his radical views by the time his meeting with Perls took place (reputedly in an all-night Greenwich Village coffee house). (For a study of Goodman’s contribution to Gestalt Therapy, see Here Now Next by Taylor Stoehr.)

The first Gestalt institute was established in New York in the early 1950s. It was a small underground group of radical therapists, going against the grain of American psychiatry and society. After all, the 1950s were a time of conformism. Poet Robert Lowell called it the ‘tranquilised decade’.

This collaboration of Perls and Goodman led to the compilation of a basic text for the theory and method of Gestalt Therapy. This significant work gives the basic groundwork for a revolutionary new method of therapy. It is a difficult book; it cannot be simply ‘swallowed’ as many popular psychology books are, but it is the essential work for the serious student, and one to re-read, study, chew and digest. The first half contains a series of awareness exercises. Some of these may seem quite lame today, but remember, these were written nearly half a century ago. The second half, largely written by Goodman, supplies the theory.

In the 1960s, Perls became more widely known through his work at California’s Esalen Institute. Here he developed a more charismatic ‘West Coast’ style; the books from this period are superficial, mainly taped from ongoing workshops. Now, over 70 years old, Perls became a ‘guru’ with his flowing white beard, lively eyes, and theatrical style, he was described as a cross between Rasputin and Santa Claus! It is this later Fritz that we see in Gestalt Therapy Verbatim, a best-selling but simplified version. But Perls never endorsed the freaky carnival games associated with Esalen. In his last theoretical statement, he warns against the ‘peddlers of instant Joy, the turner-onners of the so-called easy road of sensory liberation’. It is not necessary to have instant breakthroughs; in actuality, Gestalt therapy aims for small incremental changes in awareness.

One problem of any movement is the apotheosis of the leader, and this, unfortunately, has also plagued Gestalt therapy. There are now numerous ‘little Fritzes’ trying to imitate the style of ‘Guru Fritz’, without his substance. These absurd pseudo-gestaltists, many with no training except for a weekend workshop, are an example of the introjection of an authority figure. It is not necessary that therapists be a reincarnation of Perls; an authentic therapist develops his or her own personal identity based on his or her experience and existence.