Targeted to hit the road in two years, URBEE 2 represents a significant milestone in the world of traditional assembly-line manufacturing. 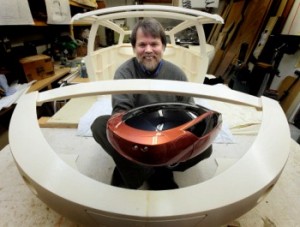 “A future where 3D printers build cars may not be far off after all,” said Jim Bartel, Stratasys vice president of RedEye On Demand. “Jim Kor and his team at KOR EcoLogic had a vision for a more fuel-efficient car that would change how the world approaches manufacturing and today we’re achieving it. URBEE 2 shows the manufacturing world that anything really is possible. There are few design challenges additive manufacturing capabilities can’t solve.”

The KOR EcoLogic team will fully design URBEE 2 in CAD files, sending them to RedEye On Demand for building through Stratasys’ Fused Deposition Modeling (FDM) process. This unique process applies thermoplastics in layers from the bottom up, yielding parts that are durable, precise and repeatable. The finished two-passenger vehicle will comprise 40 large, intricate 3D-printed parts compared to hundreds of parts in the average car. The strong, lightweight vehicle will be designed to go 70 mph on the freeway, using a biofuel like 100 percent ethanol. The goal is for URBEE 2 to drive from San Francisco to New York City on only 10 gallons of fuel, setting a new world record.

“As a mechanical engineer, I’ve always believed we could use technology to help us solve some of society’s greatest challenges, like minimizing our dependence on oil and reducing ozone emissions. How cool is it that American manufacturing can evolve to tackle these challenges head-on? Our team is excited to launch URBEE 2, putting a next-generation vehicle on the road that will eventually be sold to the public,” said Jim Kor, president and senior designer for Winnipeg-based KOR EcoLogic.

URBEE 2, which stands for urban electric, follows in the tracks of its conceptual predecessor, Urbee 1. Produced in 2011 as a partnership between KOR EcoLogic, Stratasys and RedEye On Demand, Urbee 1 proved that 3D printing could in fact produce large, strong parts that meet accurate specifications of a car body. URBEE 2 will take the basic concepts of Urbee 1 to a higher level, including features like a fully functioning heater, windshield wipers and mirrors.

“With the Urbee 1 project, I learned that product design is nearly unencumbered by considerations on how parts can be made with digital manufacturing. That liberation is incredibly powerful and holds a lot of potential for the future of manufacturing,” said Kor.

For more about RedEye On Demand’s services and applications:

RedEye On Demand, by Stratasys, makes prototyping and the production of low-volume, complex parts fast and easy. RedEye assists engineers in all phases of product development from conceptual modeling to the production of end-use parts. As the leader in on-demand, 3D printing services and powered by the innovation of Stratasys, product developers rely on RedEye for the breadth and reach of its manufacturing technologies. These technologies include Fused Deposition Modeling (FDM), PolyJet, cast urethane molding and injection molding. RedEye’s global distributive manufacturing network includes more than 140 additive manufacturing systems worldwide. Through its vast network, RedEye is able to streamline and expedite the development time for parts, reducing costs and time to market. Online at RedEyeOnDemand.com