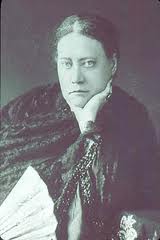 Example of Teaching
“The Universe is the periodical manifestation of this unknown Absolute Essence.” 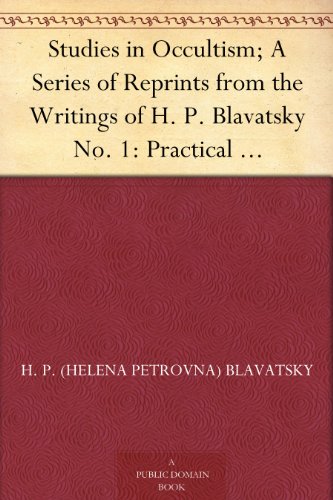 Studies in Occultism; A Series of Reprints from the Writings of H. P. Blavatsky No. 1: Practical Occultism-Occultism

Helena Petrovna Blavatsky (1831-1891), commonly known as Madame Blavatsky, was born of Russian nobility and she did much to spread Eastern religious, philosophical and occult concepts throughout the Western world. Her ties to Spiritualism date from her arrival in New York in July, 1873. She first worked as a dressmaker and, after her acquaintance with Colonel Henry Steel Olcott at Chittenden, Vermont, in the house of the Eddy Brothers (famous physical mediums), she launched a career in journalism, writing mostly on Spiritualism for magazines.

She was a great authority on theosophy, the doctrines of which she derived from the the two years she spent  in Tibet studying with the Lama. HPB founded The Theosophical Society in New York City in 1875 with the motto, “There is no Religion higher than Truth.”  The Theosophical Movement made her one of the most extraordinary and controversial figures of the 19th century.  About the time the Society began, she started to write her first major work, Isis Unveiled, and after its publication in 1878 she and H. S. Olcott left for India. There they worked to re-establish Oriental philosophical and religious ideas, largely through the pages of The Theosophist, a magazine which Blavatsky founded and edited.

The Theosophical Society professed to “expound the esoteric tradition of Buddhism and aimed at forming a universal brotherhood of man, studying and making known the ancient religions, philosophies and sciences, and investigating the laws of nature and developing the divine powers latent in man.”  Perhaps all of her work can be summed up in one of her maxims: Compassion is the law of laws. She explained that brotherhood is not a mere ideal – it is a fact in nature on the spiritual plane.

Madame Blavatsky – Who Was She?