Hollow Rituals Have No Value

by the Sikh Missionary Society: Guru Nanak Dev while on his eastward journey reached Hardwar.  It is on the banks of the river Ganges and is one of the major centers for Hindu pilgrimage. 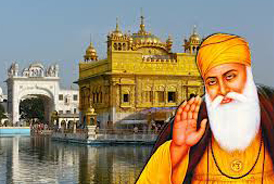 The people, gathered there in large numbers, were bathing in the holy river.  Guru Nanak Dev observed many people throwing water towards the sun in the east.  The Guru had already heard about this meaningless ritual.  He, therefore, thought it the right place and the proper time to give correct guidance that those kinds of mindless hollow rituals have no value. Guru Nanak Dev entered the river for purposes of bathing as other common pilgrims were doing. Instead of throwing water to the east, he, however, started throwing water in the opposite direction towards the west.  Taking him as a naive visitor, the nearby bathers told him that he was not performing the rituals correctly.  They advised him to throw water to the east.  Guru Nanak Dev continued throwing water towards the west pretending that he was very much absorbed in the ‘holy’ act and had not heard anything.  Soon, many people gathered there to tell him that the proper method of performing the ritual was to throw water in the other direction.  His water thrown to the west was of no use to him or to his dead ancestors.

Seeing a lot of people around, Guru Nanak stopped throwing water, looked towards them and asked, “What is the matter? What is wrong with my throwing water?”  Many people spoke in one voice.  “The water is to be thrown towards the rising sun so that it reaches your dead ancestors.”  Guru Nanak Dev replied that his crops in his village were dying.  The village is toward the west.  He wanted to irrigate those crops.  After hearing this reply the people started laughing.  One of them questioned him as to how the water thrown by him could reach hundreds of miles away.  The Guru became serious and asked, “If the water thrown by me cannot reach a few hundred miles away on this very earth, how can water thrown by you to your dead ancestors reach them in the heavens?”

The people became silent and started thinking over the reply given by the Guru. They had no logical argument to challenge his statement.

Guru Nanak Dev came out of the river and the crowd followed him.  The Guru calmly told them the truth.  He explained that hollow rituals do not have any religious value.  They should love, respect and take care of their parents when they are alive.  When people die, they do not need anything from us and neither can we send them anything after they have left this world.  After death, people get what they have given to the needy, out of their honest earnings, while living on this earth.

Serve your parents and others when they are alive.  Hollow, mindless rituals after their death have no value to them at all.