By Edie Weinstein-Moser, Wisdom Magazine: When the word ‘shaman’ is voiced, an image of someone of an indigenous culture comes to mind. Rare is the person who visualizes a blond, Nordic looking woman; a former art dealer with a ‘mainstream’ life in California. Lynn defies stereotype and categorization. 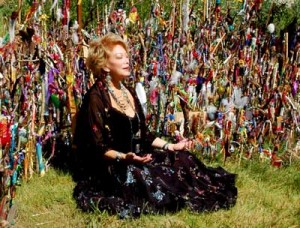 Little did she know when she laid eyes upon a photograph in an art gallery, that life as she knew it would alter dramatically. Her best selling book Medicine Woman celebrated its 25th anniversary November of 2006 with a reprint edition. Since then, she has published 19 other books, in 12 languages. Her most recent is called Writing Spirit. Lynn’s work takes the reader into realms sometimes just beyond our peripheral vision and into the depths of our souls.

Wisdom: Please explain, in simple terms, what shamanism is.

Lynn: Shamanism is an ancient term that was translated by archeologists and anthropologists during recorded history and it has to do with people who have special abilities. It began as a description of a medicine person, a healer; someone very special within a tribal situation. People of high degree who had special abilities to see colors around people, to see who needed to be healed. A shaman understands the harmonies of the universe and knows how to choreograph those energies.

Wisdom: What does it mean to be, as you refer to yourself; ‘a 21st century shaman’?

Lynn: I think what’s happened in all spiritual work, is that it is very hard to find words to describe the transformation into the spiritual, because we only have a couple of words. We have ‘spiritual’, we have ‘sacred’, we have ‘religion’. We don’t have very much else, unless you go into different nations. A 21st century shaman may be someone who is not Native American, not from the Aboriginal world, but still has special abilities and who has maybe grown up in an urban life and within the Western culture. I speak about Western shamanism, because that’s where I’m from.

Wisdom: You’ve been able to bridge the cultural gap between Native and non-Native teachers. How has that played out for you?

Lynn: It has been difficult. I’m blond, Northern European and spent a long part of my life in Beverly Hills. People had been taking pot shots at me, that’s for sure. Yet, when I was very young, we lived on a small ranch in Spokane, Washington, my friends were all Native American and we would ride our horses to school. I began to realize very early on that I could see lights around people. I thought everybody could, until one day my Native American girlfriend was horrified that I could see red around her and I knew that her father had beaten her before she came to school. She was horrified that I could see that and she wanted to hide it. I realized that people felt that it was an invasion of privacy. I wanted to turn off my abilities to heal. I knew the source of their pain. It wasn’t really healing the effect, as much as it was the source of an illness or some kind of a trial in their lives. I was in my early 20’s when I finally realized that you can not live being something that you’re not.

Wisdom: So, was that an answer to a call for you to be true to yourself?

Lynn: Yes. I needed to be true to who I was and live whatever that was. I went in search of teachers for a long time. There were many male teachers who were just fabulous and had their own way of teaching, but didn’t resonate with me and I needed to find teachers who were women. That was just for me. It’s not that men can’t teach women, certainly that happens often. Finally, The Sisterhood of the Shields presented themselves. Agnes Whistling Elk and Ruby Plenty Chiefs sent me a kind of an invitation in a painting. I had been kind of a peripheral art dealer. I was always looking, I felt this yearning inside of myself like so many people feel today. A yearning for the truth of things. They don’t know where to find it. They don’t understand the meaning of their life; why they were born and why they’re going to die and why even furthermore, they don’t have the consciousness of it. I was in an art gallery and saw a picture on the wall. I went up to it and put my hands on the frame. I suddenly was drawn into the photograph. I felt the North wind in my hair and I jumped back from it. I looked at the legend underneath the photo and it said, ” 1800-something McKinnley” and it was a Stieglitz exhibit. I thought “How odd for this picture to be here.” My friend who was with me, wanted to leave and go somewhere else, so we did. The next morning I went back to that gallery and sure enough, that picture wasn’t there, it never had been there, according to the curator. What I didn’t realize at the time, was that this was an invitation from my teachers. Along the trail of a few months of dreams every night, I would always see this face of an elder Native American woman who was showing to me, in her hands, this beautiful basket. I started asking people about it. It was an invitation to a whole process of wisdom and learning. I met a medicine man in an odd way and he told me some things about my dreams. He pointed my way to Northern Canada and I just followed the thread. It’s interesting…a lot of people say to me, “Why were you picked? Why did this happen to you?” I asked Agnes Whistling Elk that question. When I met her shortly after that, through a series of extraordinary events, I finally found Agnes, the keeper of the basket in an old cabin, in the North of Canada. One of the first things I asked her was “Why me? What am I doing here?” She said, “Every one of us is called, but few of us have the courage to follow their dream.” That was the beginning of my work with her.

Wisdom: How have you evolved since the experiences highlighted in Medicine Woman?

Wisdom: Since aging is sometimes fraught with fear and debilitation, how does aging appear to you as you are in the second portion of your life?

Lynn: It is not for the faint of heart. I must say, that being in the Sisterhood of the Shields, most of these women have moved out of their journey into aging. We agree, before we were born, that we will age in a certain way. What I mean by agreement is that we are told, that we will be young and then middle aged and then we will be old and then we are going to die. We accept this as part of our reasoning. On the other hand, there are some people who don’t believe that and who move past and through it, perhaps without aging in the same way. We rejuvenate our bodies every seven years. The DNA messages to the cells are inhibited as you get older. Why does that happen? If you understand the power of mind over the body, then you can begin to realize how that could possibly be shifted out of illness. What needs to be done first, is to understand why people choose a certain disease. Usually, it is to keep them from some goal, that they are actually moving toward, such as the process of ‘enlightenment’. If you are moving toward higher consciousness, sometimes the ego mind will keep you back. It wants control. That’s a huge discussion. I talk about this in every book I have written. We have aspects of ourselves that fight against us, that don’t wants us to be whole, that don’t want us to be free. On the other hand, there are other aspects that do. That’s what you want to be in touch with; not negativity, not complaining, not “poor me”. It’s that aspect of self than can move toward the positive and move toward becoming the manifestation of every dream you’ve ever had. Anything is possible…anything. We are all part of God, whoever God is to you, Goddess, etc. It is the creative source of the universe that comes out of a kind of chaos. I teach this in my school and write about it. How do you approach higher consciousness, so it becomes a part of your being, not just words in your mind?

Wisdom: In what ways can we tap into the power of love and consciousness to co-create our lives?

Lynn: You can identify your issues. Let’s say you have an addiction. It can be an addiction to sadness or disease, to alcohol or bad relationships. People tend to move into addictions to bleed off their energy. You need to do that first, so you can look at where you and are you addressing it? You don’t push it to the side anymore. Then you look at the source of ‘why’. Why was I in so much pain that I had to move into alcohol and drug addiction? What is that pain from? Most people can’t go there, because they are actually afraid of healing something that has become like an old friend. You have to address what is holding you back. You know what the answer is. Stop it, because it is wasting your life. In Writing Spirit, which is the latest book I just wrote, you learn about finding your creative soul. Then you have to uncover again, all of the things that are bleeding away your energy and are holding you back. These are the addictions you have, so what kind of gifts do they give you that you keep it?

Wisdom: What are the important questions to ask ourselves as human/spiritual beings?

Lynn: How are we going to shape-shift this world into something peaceful and is that even possible considering what human beings are made of? Ask yourself, since there is so much war in the world today, how are you at war within yourself? You have one responsibility in life and that is to enlighten yourself. How am I physically moving toward enlightenment and to educate myself? How do I express what I have found in this life? Spiritually, how did I combine this together to make me a whole person? How do I feel about the intellectual process of all of this? You have to commit yourself to a process of learning for your higher consciousness to emerge. Everyone is seeing through veils of ignorance. We have to throw those veils of ignorance away.

Lynn can be reached via her website www.lynnandrews.com Learn about her school and her upcoming trip to Hawaii.