by Len Platt: We have long known that theosophy was of interest to Joyce, in part because of a well-known local connection—its practice by key figures of the Irish Literary Revival. 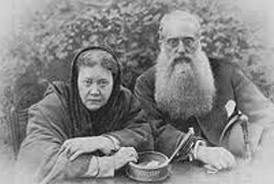 Charles Johnson, under W. B. Yeats’s influence, met A. P. Sinnett and formed the Dublin Lodge of the Theosophical Society in 1885, an organization that, according to Ernest Augustus Boyd, one of the earliest historians of Irish revivalism, was

as vital a factor in the evolution of Anglo-Irish literature as the publication of Standish O’Grady’sHistory of Ireland, the two events being complementary to any complete understanding of the literature of the revival. The Theosophical Movement provided a literary, artistic and intellectual centre from which radiated influences whose effect was felt even by those that did not belong to it.1

Yeats, George Russell, and John Eglinton, all key figures in the Irish Literary Revival, joined the Society at various times. Both Russell and Yeats knew Madame Helena Petrovna Blavatsky personally, and both were deeply influenced by her. For seven years, Russell remained a member of the “Household,” a group of theosophists who lived together and formed the nucleus staff of The Irish Theosophist begun in 1892.2 This influential journal remained in publication until 1897 when it was replaced by The Internationalist, for which Eglinton wrote a great deal. Thereafter, the Irish theosophy movement, in parallel with the wider international organization, went through a number of breaks and schisms. Russell in particular, despite the upheavals, remained committed and active, especially in the later years as head of the Hermetic Society, until he left Ireland in 1933, just two years before his death.3

There were Dublin lodges and Dublin-based theosophical publications from the mid-1880s right through to the early 1930s, and Joyce knew this environment quite well. He read some of the theosophical literature as a student, including Sinnett’s Esoteric Buddhism and was distinctly unimpressed, according to C. P. Curran, although Stuart Gilbert implied differently.4 Very much later, in 1931, he read and took a series of notes (in VI.B.33, pp. 45–48, 59, 60–63) from Arthur Edward Waite’s The Occult Sciences, which had a chapter on theosophy.5 There were also three pages of notes taken at VI.B.28, 17–22, from the same volume. Relatively few of these notes ended up in the Wake, but there was, in any case, an established fictional treatment of the subject in Ulysses, where theosophy is mocked as a cranky absurdity practiced by a trendy elite; and it receives considerably worse, and much-extended, treatment in the Wake.6

Early Wakeans identified a substantial number of Wakeallusions to some of the key figures in theosophy—Annie Besant, Colonel Henry Steel Olcott, Sinnett, and, especially Blavatsky—with Adaline Glasheen, in particular, showing how Joyce ridiculed the latter, in part through the repeated play on her maiden (or “mudhen”—FW 393.23) name.7 This was von Hahn (and “hahn” is German for “cock”—FW 66.23); thus any allusion to a “hen” is likely to implicate Blavatsky. Glasheen argues that the Wake letter picked over by the hen/Kate figure in I.5 likely represents Blavatsky’s works in that “the letter is a nothing, but to the idiot female it seems an important statement about the condition of man” (32). It should be added here that, in Blavatsky’s work, the egg, both “spiritual” and “mundane,” is of special significance—an emblem of eternity, infinitude, regeneration, and rejuvenation.8 This means that a complete explication of Blavatsky’s significance in the Wake would need to consider not just the hen/ Hahn connection but also the many references to eggs.

Besides these biographical allusions to Blavatsky and company, James S. Atherton, like Clive Hart and, later, Roland McHugh, found a few allusions to Isis Unveiled—the two volumes were among Joyce’s personal book collection—but implied that the real significance of this massive work might run deeper.9